Do Shakespeare's plays have a phylogeny? 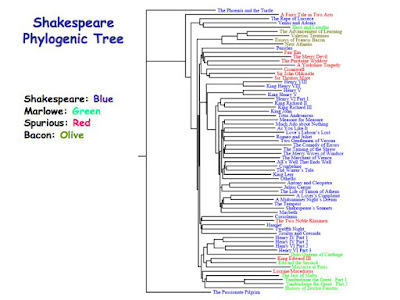 However, while all human artifacts have a history, not everything has a phylogenetic history. There can be transformational history, for example, where concepts simply change through time without diversifying. This can represented by a timeline rather than a phylogeny, as discussed in these blog posts:

There are also situations where artifacts simply cluster together, based on their similarity. This can be represented as a tree-like diagram or a network, but such a tree/network is not a phylogeny, because the clustering does not necessarily have anything to do with common ancestry. Examples discussed in this blog include:

The problem with this latter situation is that we can always mathematically measure the similarity between concepts or objects, and therefore we can always cluster them based on this similarity, even if the clusters have little meaning. I have previously discussed this issue in this blog, noting that if the similarity measure used does not model evolutionary patterns then it cannot be expected to produce a phylogeny (Non-model distances in phylogenetics).

Another case in point is the work of William Shakespeare. Can the plays, for example, be considered to have a phylogeny? Each play certainly has a phylogeny on its own, because the Shakespearean author is well known for having taken the ideas for the plays from previous sources. So, each play has a phylogeny (a reticulate history) based on the historical connections among its sources. However, the plays as a group do not have a phylogeny (not unless they have been plagiarized from each other, anyway). Does Othello really share a common ancestor with King Lear? It certainly has similarities, if only on the basis that it is one of the Tragedies (along with Macbeth, etc). But they are not phylogenetic similarities, and there is no common ancestral Shakespearean play.

As shown by the picture above, this point is not always appreciated. The alleged phylogeny is taken from a press release from the Lawrence Berkeley National Laboratory. The textual similarities among the plays are based on what are called "feature frequency profiles", which have nothing to do with evolutionary history. So, while the data analysis may or may not be helpful for identifying the author(s) of the so-called Shakespearean plays, it is not much help for constructing a phylogeny.

The data analysis is discussed in more detail by: