"Basal" and "crown" are dirty words in phylogenetics


There are at least two misleading expressions that one very commonly encounters in the professional phylogenetics literature: "basal branch of the tree", and "derived species".

The first expression is used to refer to an unbranched lineage arising near the common ancestor, when compared to a more-branched lineage. For example, in the first diagram below we might say that taxon A is on a "basal branch", whereas taxon B is not. The taxa associated with taxon B are then referred to as the "crown" of the tree. But, how can one lineage be more basal than another? After all, both lineages connect to the "base" of the tree at the same point. To claim that one is basal and the other not is like saying that one brother is more basal than another in a family tree just because he has fewer children!

The second expression refers to a species that has more "derived" characters than another. For example, in the diagram we might say that taxon B is more derived than taxon A. Characters change from ancestral to derived through time (eg. scaly skin covering is ancestral while fur is derived, because the latter arose later in time). However, this does not make any species more derived. It is the characters that are derived not the species — each species has a combination of ancestral characters and derived ones (including humans).

These issues seem to arise from the tree iconography. Some people seem to conceptualize this as a pine tree rather than a bush (as drawn by Charles Darwin in the Origin). A pine tree, indeed, does have basal branches and a crown. Here is an example from a sign in my local botanical garden, which tries to explain plant phylogenetic relationships to the general public. This tree does, indeed, have basal branches and a distinct crown. 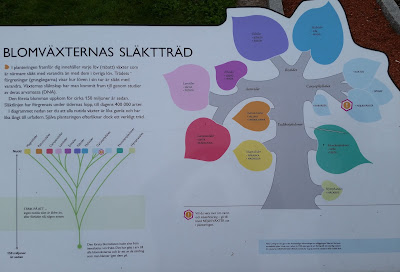 This issue seems to have started with Ernst Haeckel in the late 1800s. Haeckel's first phylogenies (see Who published the first phylogenetic tree?) were drawn as multi-branched bushes, rather similar to the diagram that Darwin himself had published. However, Haeckel then veered away from this approach when explicitly discussing the evolution of humans. Here, he drew a tree with a distinct central trunk and much smaller side-branches (presumably modeled on an oak tree, rather than a bush). This image emphasizes one particular lineage at the expense of the others, because there is one taxon obviously sitting at the crown of the tree while the others are relegated to side-branches.


This approach to drawing a phylogeny can be used to put any chosen organism at the crown of the tree, not just human beings, as illustrated by the following diagram from James Scott (which looks like it is actually modeled on a pine tree). This is a fundamental characteristic of a phylogeny — it can be drawn so that any part of the diagram is at the crown. However, to be accurate it should always be drawn so that no one lineage is emphasized over any other one — there should be no taxa sitting at the crown.


Distorted images occur in several ways in modern evolutionary biology. This topic has received considerable attention in the literature, and there are a number of very readable expositions of various parts of it. Here is a brief list.

O'Hara R.J. (1992) Telling the tree: narrative representation and the study of evolutionary history. Biology and Philosophy 7: 135-160.