The earliest tree / network of languages (1671)

Actually, Stiernhielm's "tree" is a hybridization network, thus making it also the first known phylogenetic network, of any type.

The Gothic Bible or Wulfila Bible is the Christian Bible as translated by Bishop Wulfila into the Gothic language spoken by the Eastern Germanic, or Gothic, Tribes in c.350 AD. Wulfila invented the Gothic alphabet, comprised of Greek letters and runic signs improvised by himself, so that he could do this, and it is thus considered to be the first text written in German.

Stiernhielm's edition sets out four texts in parallel (ie. four columns per double page): Gothic, Icelandic, Swedish (called Suedo-Gothic), and finally "vulgar Latin". The transliteration of the Gothic text is in Latin font, the Icelandic and Swedish translations appear in the so-called "Gothic" letters, and the Latin translation is, naturally, in Latin font.

What is important to us, however, is that Stiernhielm took the opportunity to present a 48-page preface: De Linguarum Origine Præfatio [Preface on the Origin of Language], in which he discussed his ideas about the origins of languages. The diagram shown above (from page xxxvi) is apparently intended to illustrate the idea that three Germanic dialects [Svevica, Mechlenbergia, Brabantica] could gradually merge into one new dialect [Lingua Nova], which would be different from the earlier ones but would still be a Germanic dialect [ipsa Germanica]. This is thus explicitly a hybridization network. 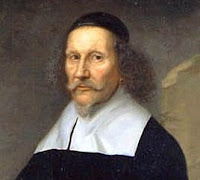 However, Stiernhielm went much further than this. As Umberto Eco (1995) has described, there has long been the idea (dating back at least to the Christian Bible, and the story of the Garden of Eden) that there once existed a language which perfectly and unambiguously expressed the essence of all possible things and concepts, and that the jumble of modern languages is a confused corruption of this "perfect language" (this is the story of the Tower of Babel). Many European philosophers have speculated about a solution for this modern confusion, either by trying to retrieve the language spoken in the Garden of Eden, or by thinking of a "Language of Reason" that would possess the perfection of the lost speech of Eden.

The languages that have been proposed as this "perfect language" include, in time order:

Hebrew, Gaelic, Tuscan, Dutch, German, Swedish, English, and French.
Stiernhielm, in his Preface, was responsible for the suggestion of Swedish.

Stiernhielm's argument was that Old Swedish (Suedo-Gothic) came closest to the "primaeval language" because Old Swedish was a Japhethian language. In the Bible, Japheth had not been present under the Tower of Babel, and therefore was not involved in the subsequent confusion of languages. Stiernhielm argued that the language of Japheth and his descendants ought thus to be a continuation of the language spoken in the Garden of Eden. He concluded that all of the Gothic dialects arose from this stock (he illustrates this with family trees), and he considered Old Swedish to be the most archaic Japhethian language.

This patriotic conclusion was not at all out of place in 17th century Sweden. The Swedish empire was then at its height, covering most of northern Europe. Indeed, shortly after Stiernhielm, Olof Rudbeck (a professor at Uppsala University) wrote a four-volume work (Atlantica sive Manheim) supporting the idea that Swedish was the original language of Adam, and also identifying Sweden as Atlantis, the cradle of civilization, from which civilization spread to the rest of the world. He did some useful things, too, including founding what later became Linnaeus' botanical garden.

Thanks to Johann-Mattis List for alerting me to Sutrop's paper, and thus leading me to Stiernhielm's work.

Eco U. (1995) The Search for the Perfect Language. Wiley-Blackwell.

Sutrop U. (2012) Estonian traces in the Tree of Life concept and in the language family tree theory. Journal of Estonian and Finno-Ugric Linguistics 3: 297-326.