The Tree of Architecture


The following diagrams are taken from the book A History of Architecture on the Comparative Method for the Student, Craftsman, and Amateur. This book is considered to be "a canonical text that has played a formative role in the education of generations of architects" because it really does "cram everything into a single volume". The first edition of the book appeared in 1896, with the 20th edition appearing in 1996. 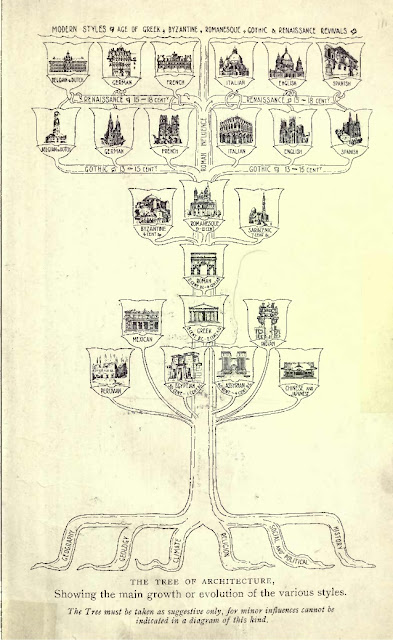 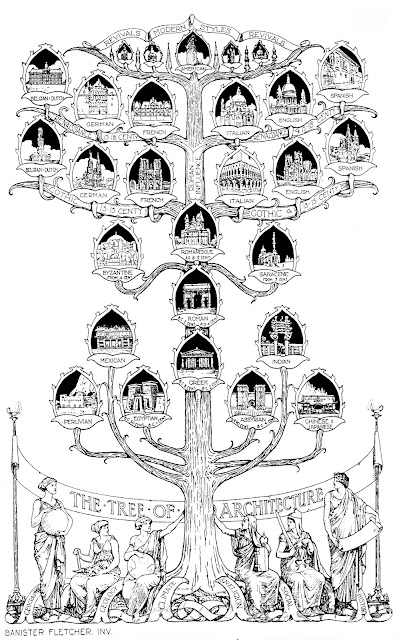 As noted in the first figure, these trees purport to show the "evolution" of the various architectural styles. However, they do no such thing.

At the base of the tree trunk is a set of individual architectural styles that apparently led nowhere, while at the crown of the tree several styles are repeated. Each of the latter styles exist on two side-branches from the main trunk, each pair connected by vertical tendrils. So, this is a network, at least. However, the meaning of this network is not immediately obvious. Indeed, even a short perusal of the diagram should lead you to the idea that the meaning is contained more in cultural bias than in the actual history of architecture.

The history of the book itself is somewhat complex. The first edition was written by the father and son team of Banister Fletcher & Banister F. Fletcher. Subsequent editions were revised by Banister F. Fletcher (the son), with the 6th edition (1921) being rewritten by Fletcher and his first wife (who got no credit, even though the father's name was then dropped). After Fletcher's death in 1953, the 17th edition (1961) was revised by R.A. Cordingley, the 18th (1975) by James Palme, the 19th (1984) by John Musgrove, and the 20th (1996) by Dan Cruickshank. The tone and arrangement of the book was changed with each edition.

The tree has been analyzed in detail by Gülsüm Baydar Nalbantoglu (1998. Toward postcolonial openings: rereading Sir Banister Fletcher's "History of Architecture". Assemblage 35: 6-17). She notes the following:


Until the fourth edition of 1901, A History of Architecture had been a relatively modest survey of European styles. The fourth edition, however, appeared with an important difference: this time the book was divided into two sections, "The Historical Styles", which covered all the material from earlier editions, and "The Non-Historical Styles", which included Indian, Chinese, Japanese, Central American, and Saracenic architecture.

The "Tree of Architecture" has a very solid upright trunk that is inscribed with the names of European styles and that branches out to hold various cultural / geographical locations. The nonhistorical styles, which unlike others remain undated, are supported by the "Western" trunk of the tree with no room to grow beyond the seventh-century mark. European architecture is the visible support for nonhistorical styles. Nonhistorical styles, grouped together, are decorative additions, they supplement the proper history of architecture that is based on the logic of construction.


That is, "architecture" for the Banisters was defined as being about a building's construction, not its decoration. European cultures focused on construction, and they developed their styles through time. Other cultures focused on decoration, and were therefore not a proper part of architecture, and had no historical development. This is what the tree attempts to show.

This cultural bigotry was corrected in the final few editions of the book (after the Fletchers were no longer involved), where all architectural styles were considered more-or-less equal.