The first known pedigree of a non-noble family


I noted in an earlier post (The first royal pedigree) that interest in genealogy dates back to at least Roman times, where the so-called stemmata were displayed in homes, to distinguish between the patrician class (those with proven noble ancestry) and plebeians (commoners). We are not quite so ostentatious today, but the nobility are still just as snooty about their ancestry.

I also noted that the first known illustration of a noble pedigree is the Tabula Genealogica Carolingorum (c.1000 CE), which traces Cunigunde of Luxembourg's ancestry in a tree-like manner back to Charlemagne, and thence to the origin of the Carolingian dynasty in the mid 500s. This raises the question of the first known written pedigree not involving the nobility.

This appears to be a diagram labelled Genealogia Ouduini et Heimerici Decani Filii Sui, which dates from c. 1121 CE. This type of pedigree may have been relatively common among certain families at the time, but this seems to be the only surviving exemplar that has come down to us.

This diagram appears towards the end of the book Liber Floridus, composed by Lambert of Saint-Omer, who was canon of the city Church of Our Lady in Saint-Omer, in north-eastern France. The Universeitsbibliotheek at Ghent University owns the autograph of this work (ms. 92), i.e. the actual copy penned by the author himself; and it is in this copy that the author has inscribed his family pedigree (on folio 154r).

This may recall to many of you the trend to keep hand-written records of pedigrees in the fly-leaves of family Bibles during the 1800s and early 1900s, particularly in English-speaking parts of the world. It does, however, seem to go a bit beyond this. Lambert repeatedly identifies himself in the text as the author of the book, and he also includes a portrait of himself writing his book, although this is apparently usual in medieval iconography.

The Liber Floridus (Book of Flowers) is literally an illustrated encyclopedia, rather than an encyclopedia with pictures. You will find copies of the illustrations all over the Internet, because Lambert was an imaginative and colorful illustrator. He was apparently concerned that uneducated people would lose access to important knowledge, and so (unlike his predecessors) he deliberately created a book that was accessible to almost everyone. It contains a curate's egg of information, including mythical biology (ie. a beastiary), selected history, and particularly biblical knowledge. It also contains an account of the genealogy of the Counts of Flanders, Lambert's local nobility, which may have inspired his personal account.

So, in his personal copy Lambert included a tree of his maternal ancestors going back to his great-great-grandfather Odwin, as shown in the first figure. It is rather scrappy and unclear, and so Jean-Baptiste Piggin has digitized a copy, as shown below. 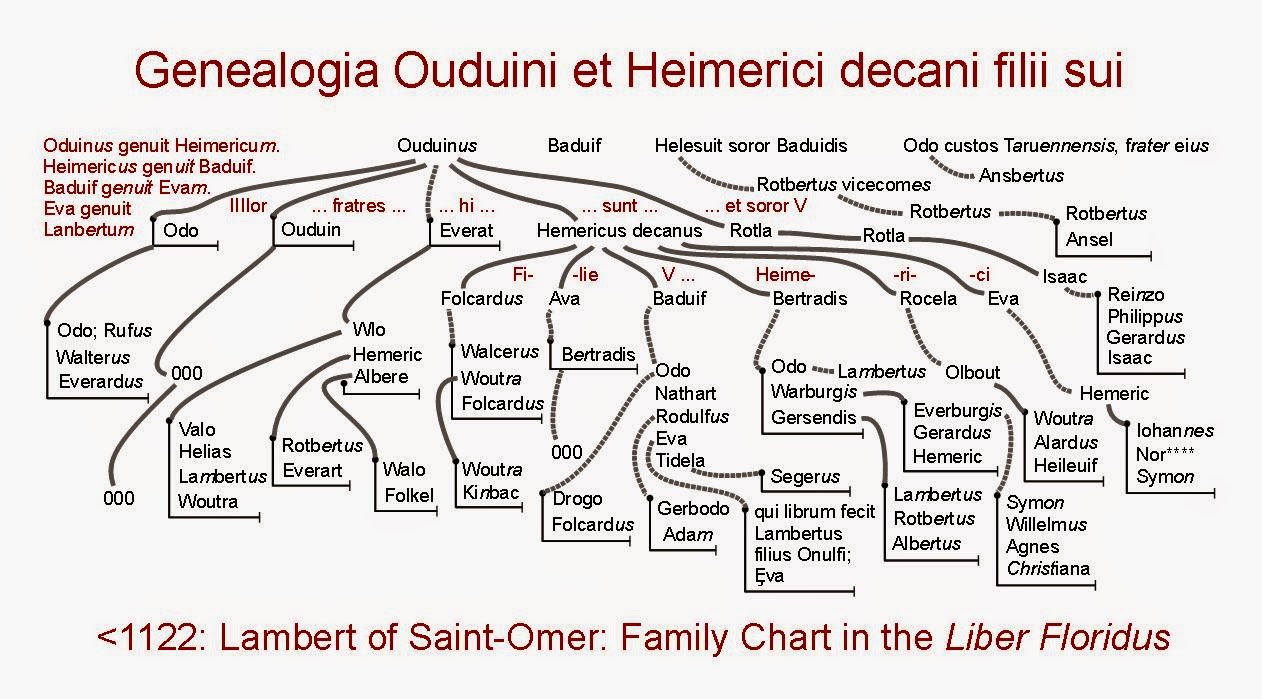 There are c.80 names crammed into the compact space. As with other early pedigrees of which we have a record (eg. The first royal pedigree), the tree is rooted at the top and the family ramifies downwards. Like the Great Stemma (see How confusing were the first written genealogies?), siblings are grouped in short vertical lists, so that groups of first-names form family blocks that have only one connection to their parent. However, unlike either of these earlier genealogies, the names are not placed within segregating roundels, but simply exist as normal text.

Lambert is at the bottom centre, labelled as "qui librum fecit Lambertus filius Onulfi; Eva" [Lambert who produced the book, son of Onulph and Eva]. His lineage is traced back to Eva and her siblings, so that these are Lambert's maternal relatives. Why his mother and not his father is not directly explained, but the genealogy is listed as being that of Odwin and Heimericus the Dean, so that Heimericus is presumably the important progenitor (his family dominates the tree). Lambert does refer elsewhere in the book to his father, Onulph, who had been canon of the Church of Our Lady before him. Just in case you are left in any doubt about the purpose of the pedigree, the text at the top left of the figure specifies Lambert's direct lineage from Odwin to Heimericus the Dean to Baduif to Eva and thence himself. 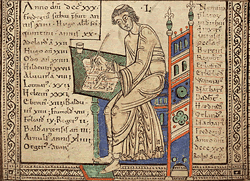 How accurate this genealogy is is anyone's guess. Presumably it represents an oral tradition, even if many of the relatives continued to live close to each other. It was not until much later that formal records were kept. In Britain, for example, from 1538 King Henry VIII required that church ministers keep records of christenings, baptisms, marriages and burials; and civil registration did not became law until 1837. The Germanic lands began to keep similar sacramental records at roughly the same time as the British; and the Scandinavian countries followed suit. Thus, in most European countries it is the church parish registers that pre-date any civil record keeping. Otherwise, for commoners there have been only personal records.