How confusing were the first written genealogies?


In a previous post I introduced the Great Stemma as the earliest known pedigree, being a genealogical view of biblical history (The first infographic was a genealogy). In it I noted that people were enclosed in circles, which were connected by lines showing relationships, much as we still do today. However, the lines combined marriage, parent-offspring and brotherly relationships without distinction. So, while it is a good first attempt, the Great Stemma leaves room for informational confusion, and this was not corrected at any time during its centuries of being copied. (In fact, confusion was increased through embellishments, deletions and modifications; but that is another story.)

To illustrate the potential problem of interpreting this early type of genealogy, I have included here a specific example. 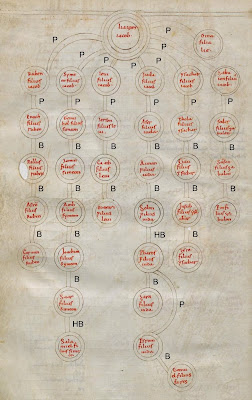 The above excerpt from the Stemma shows the the children of Jacob by his wife Leah (who is shown at the top centre), and their subsequent children (ie. Leah's grandchildren). I have annotated the diagram to show parent-offspring (P), brother (B) and half-brother (HB) relationships. Note that all relationships are between males unless specified otherwise (so, half-brothers have the same father).

Leah is at the top [generation 1], with her six sons in a row below her (in birth order left to right), and her daughter to the side [generation 2]. Below this is the first-born son of each of the sons [generation 3], followed in columns down the page by their later sons, in birth order. Sons by later relationships are shown as half-brothers. At the bottom are two of Leah's great-grandchildren [generation 4].

Thus, the genealogical diagram does not effectively separate the generations visually, and parental and fraternal relationships are depicted in the same way. These days we solve this, of course, by keeping each generation as a single row and linking each child directly to the parent. It is easy to get used to the Stemma way of doing it, because it is fairly consistent about the arrangement. If there is confusion, then each circle does specify the relationship in words.

So, as I noted, this is a good first attempt, but some of the things that we now feel need distinguishing were not distinguished by the (unknown) original author.

However, the 24 extant copies of the Stemma are not identical, and two of them try to fit more information into Leah's family tree than is shown above. This information concerns the origin of the fourth generation, which is accurately depicted as far as it goes, but the above figure leaves out a lot. Some of the extra information is shown in the Stemma version below, which adds two extra people, both of them wives. I have annotated this version the same as the previous one, except that this pedigree adds one more relationship to the mix — marriage (M). 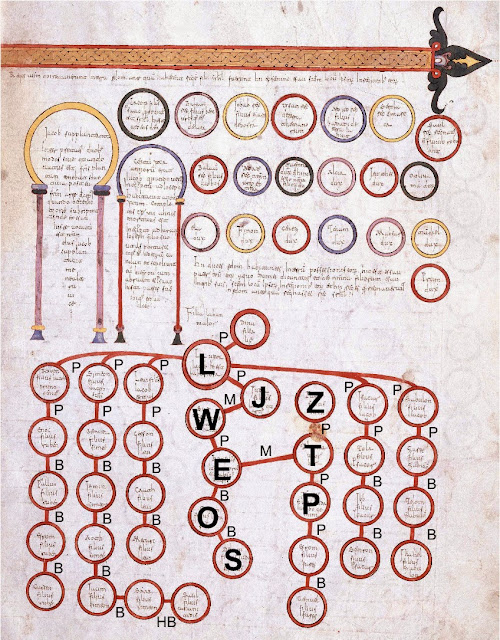 The extra details come from Genesis 38, which describes a set of relationships that would make a modern television soap-opera scriptwriter jealous. The story goes something like this (I have indicated the named people with letters in the diagram above, with Leah as L):


Judah (J) marries the [unnamed] daughter (W) of Shua. Judah and his wife have three children, Er (E), Onan (O), and Shelah (S). Er marries Tamar (T), but God kills him because he "was wicked in the sight of the Lord" (Gen. 38:7). Tamar becomes Onan's wife in accordance with the custom of the time, but he too is killed by God after he refuses to father children for his older brother's childless widow, and "spills his seed on the ground" instead (Gen. 38:8-10). Although Tamar should marry Shelah, the remaining brother, Judah does not consent, for fear of his son's life (Gen. 38:11). In response, after Judah's wife has died, Tamar deceives Judah into having intercourse with her, by pretending to be a prostitute (Gen. 38:12-23). When Judah discovers that Tamar is pregnant he prepares to have her killed, but recants and confesses when he finds out that he is the father (Gen. 38:24-26). The result is twin boys, Zerah (Z) and Perez (P) (Gen. 38:27), who are accepted as Judah's sons.

Biblically, this story is important because Judah became the founder of the Tribe of Judah, one of the twelve Tribes of Israel. Their land encompassed most of the southern portion of the Land of Israel, including Jerusalem. Both the Book of Ruth and the Gospel of Matthew identify Tamar's son Perez as an ancestor of King David, which makes Judah and Tamar also ancestors of Jesus.

Equally importantly, note that Tamar's (legal) relationship supplants the (biological) parent-offspring relationship between Judah and her sons — you would never conclude from the diagram that Perez was Judah's son, for example, rather than Er's. However, note the neat attempt to keep Tamar's children in a single column by putting one twin above her and one below (perhaps also signifying simultaneous birth).

The above part of this post was inspired by a blog post from Jean-Baptiste Piggin (The Tamar Storyboard). The first picture above is from an unnamed manuscript in the Biblioteca Medicea Laurenziana, Florence, Plut.20.54, dated c. 1050 AD. The second picture if from an unnamed manuscript in the Pierpont Morgan Library, New York, M.644, dated 940-945 AD.

Moving on, the scribes of that time tried to go even further in complicating simple genealogies, as shown in the next figure. This is drawn by Stephanus Garsia Placidus, and is taken from the Saint-Sever Beatus in the Bibliothèque Nationale de France, Paris, ms. lat 8878, dated c. 1060 AD. 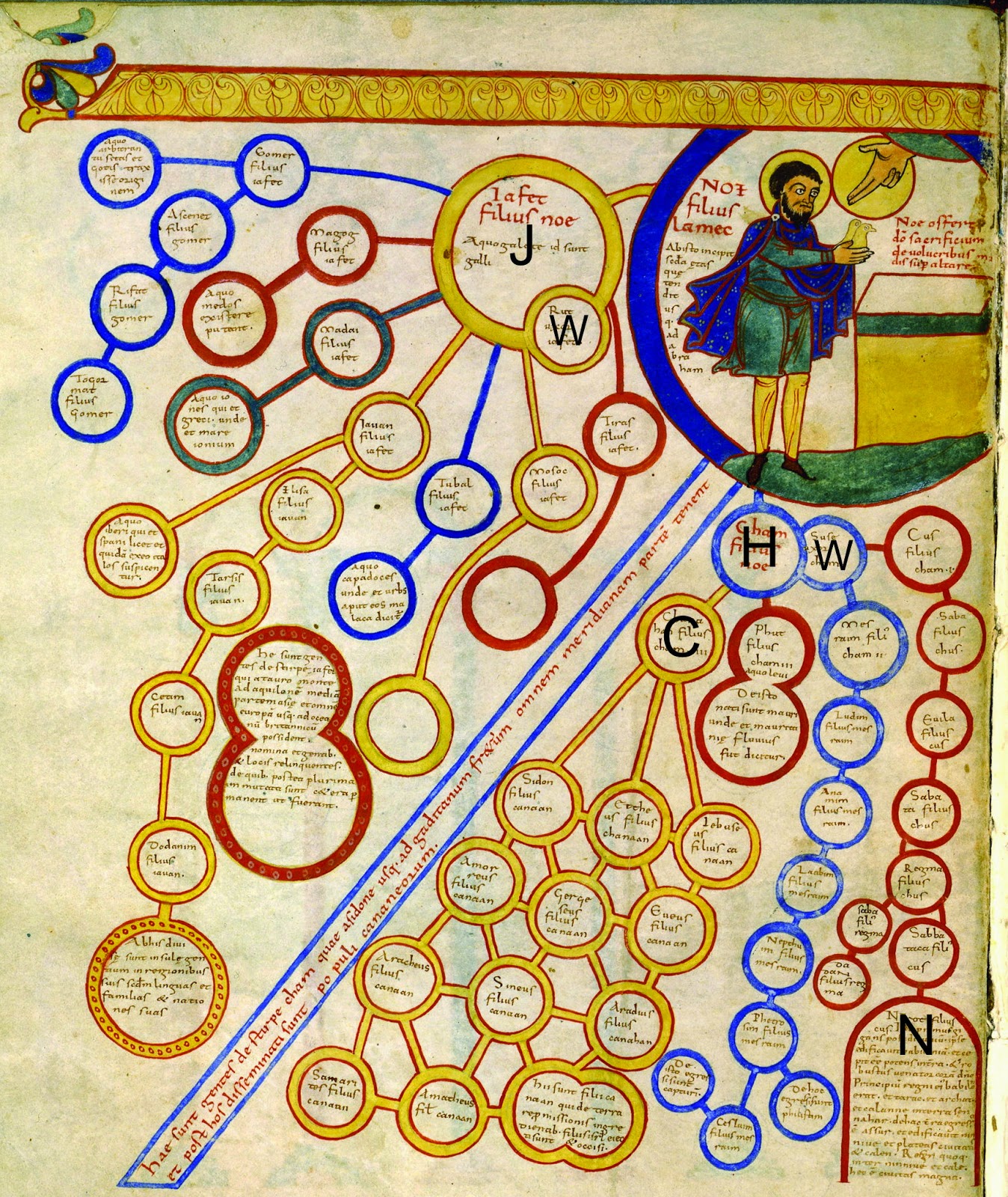 It shows the non-Semitic (ie. polytheistic) part of Noah's family. Noah is at the top right (sacrificing two doves), with his son Japheth (J) to the left and son Ham (H) below. Their wives (W) are indicated by intersecting circles, rather than by lines, which is a more successful approach than in the Stemma. Their descendants are shown in roughly the same style as above, with the first-born son followed by the later ones in order (so that the P and B relationships are not clearly distinguished) — Japheth has seven sons and Ham has four.

However, the illustrator has also tried to include a lot of history in this genealogy. For example, the sons of Ham's son Cush end with Nimrod (N), who has a small essay attached to his name. Among other things, he founded Babel, the city that plays an important role later in the Bible. Moreover, the sons of Ham's son Canaan (C) are shown as a reticulating network rather than as a simple chain. This apparently represents their roles as founders of the 11 tribes who originally occupied the ancient Land of Canaan, and who were later driven out and enslaved by the Israelites. These lines thus represent later history rather than parental or fraternal relationships.

This diagram is thus not a simple pedigree, as we would usually leave it today.