For your Christmas reading, this blog usually provides a seasonally appropriate post on fast food, including to date: nutrition (McDonald's fast-food) and geography (Fast-food maps). This year, we will focus on the effects of fast food on people.

Defining fast-food is a bit of a trick. The U.S. Census of Retail Trade defines a fast-food establishment merely as one that does not offer table service. However, legislation recently passed in Los Angeles defines fast-food establishments as those that have a limited menu, items prepared in advance or heated quickly, no table service, and disposable wrappings or containers. Some people feel that these definitions should include all pizza restaurants, even those that do offer table service in addition to take-away (or take-out). The latter are sometimes distinguished as fast-casual restaurants rather than fast-food restaurants.

About 90% of Americans say they eat fast-food, including those who visit an establishment on average once per day. The main concern about the effect of fast-food, then, is on people's diet. By "diet" I mean the combination of foodstuffs consumed each day, which may or may not match what is known to be required for a healthy human. Fast-food rarely matches this diet, and so there must be some effect of eating the stuff.

In particular, fast-food has been implicated in what is now known within medicine as the "obesity epidemic" — the observation that an increasing proportion of the people in the developed world are formally classified as obese. The usual symptom of obesity is a body mass index (BMI) > 30 (overweight is 25-30, normal is 18.5-25). BMI is an approximate measure of body fat.

Obesity has risen rapidly in recent decades, but there is some evidence that the levels are now beginning to stabilize (Obesity Rates & Trends Overview). The main risk with obesity is its strong association with potentially fatal health problems, notably heart disease, stroke, high blood pressure, and diabetes. Indeed, it has been suggested that obesity may be the greatest cause of preventable death in the United States. 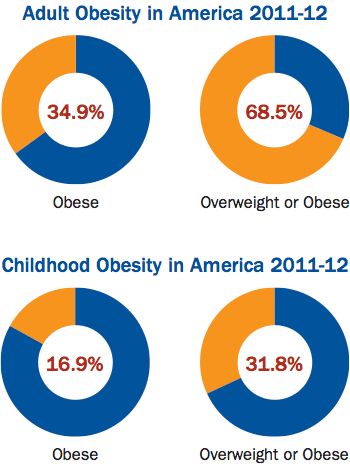 Demonstrating a relationship between fast-food and obesity is not hard, given the high sugar, carbohydrate, fat, and salt content of most of the food items. This results in the intake of more energy than the body uses, and this excess is stored as fat. This pattern shows up clearly in large-scale samples of prevalence, such as this one collated on the DataMasher site, where each point represents a state of the USA.

An obvious issue concerning fast-food is our ability, or lack of it, to understand just how many calories (or joules) there are in fast-food meals. The marketing people seem to have a clear idea about how different fast-food chains are presented in terms of their food quality, as shown in this Perceptual Map. 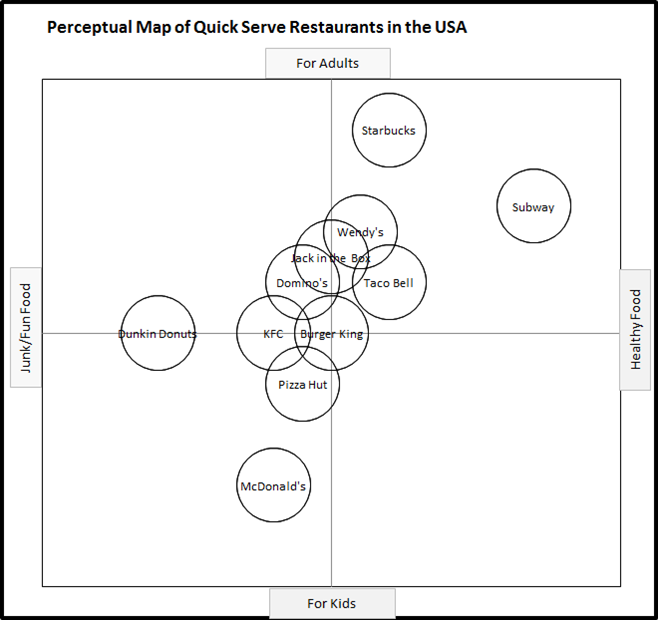 However, this perception is clearly not accurate in terms of calories, especially for Subway. An article in the British Medical Journal evaluated the ability of people to estimate the calorie content of the fast-food meal they had just purchased. As shown in the next graph, clearly in most cases there was a major under-estimate, and this was worst for the highest-calorie meals. The under-estimation of calorie content was largest among Subway diners. Diners at both Subway and Burger King showed greater under-estimation of meal calorie content than those at McDonald's, whereas diners at Dunkin' Donuts had less under-estimation. In other words, Subway is not as healthy for you as you think it is, but you already know how bad those Donuts are.

One response to this situation has been to insist that fast-food places advertise the calorie content of their food on the menu board itself. For example, it has been suggested that nutrition experts can compose apparently healthy meals based on the nutritional information provided in the menus of fast-food restaurant chains.

This will only have an effect, however, if people actually use this information when choosing their meal. An article in the Journal of Public Health suggested that most young people don't actually do so, and that people who eat fast-food most often are least likely to do so. Indeed, a report from Sandelman Associates showed that the only people who are likely to use calorie information regularly are those with a specific "calorie target" for their personal diet, as shown in this next chart.

Nevertheless, an article published in the British Medical Journal has reported a decrease in the energy content of fast-food purchases after the introduction of calorie information on the menu boards, except at Subway, where there was an increase. (Before the labeling the Subway meals chosen had fewer calories than for the other chains but afterwards they had more!)

Another important feature of fast-food is the usually large portion sizes, which exacerbates the energy imbalance. An article in the Journal of the American Dietetic Association has shown that not only does modern fast-food exceed dietary standard serving sizes by at least a factor of 2, and sometimes by as much as 8, these serving sizes have increased dramatically over the past 50 years.

What is perhaps most surprising is the truly vast difference that can occur between servings of what is allegedly the same fast-food product, not only between countries but within a single country. The following graph is from an article in the International Journal of Obesity. It shows, for the named locations, the amounts of total fat in a meal consisting of 171 g McDonald's french fries and 160 g KFC chicken nuggets. The darker colour indicates the added amounts of industrially produced trans fat. The values in parenthesis are the amount of trans fat as a percentage of total fat.

On a somewhat different note, one of the main characteristics of fast-food is the focus on a sweet taste, rather than on a diversity of tastes. In contrast, traditional cooking in many cultures has focussed on mixing together a diversity of complementary ingredients. Indeed, this was the impetus for the formation of the Slow Food movement, founded "to prevent the disappearance of local food cultures and traditions ... and combat people's dwindling interest in the food they eat, where it comes from and how our food choices affect the world around us." (It was organized after a public demonstration at the intended site of a McDonald's franchise at the historic Spanish Steps, in Rome.)

This topic was investigated in detail in an article published in Nature Scientific Reports. The authors produced the following network of food flavours. 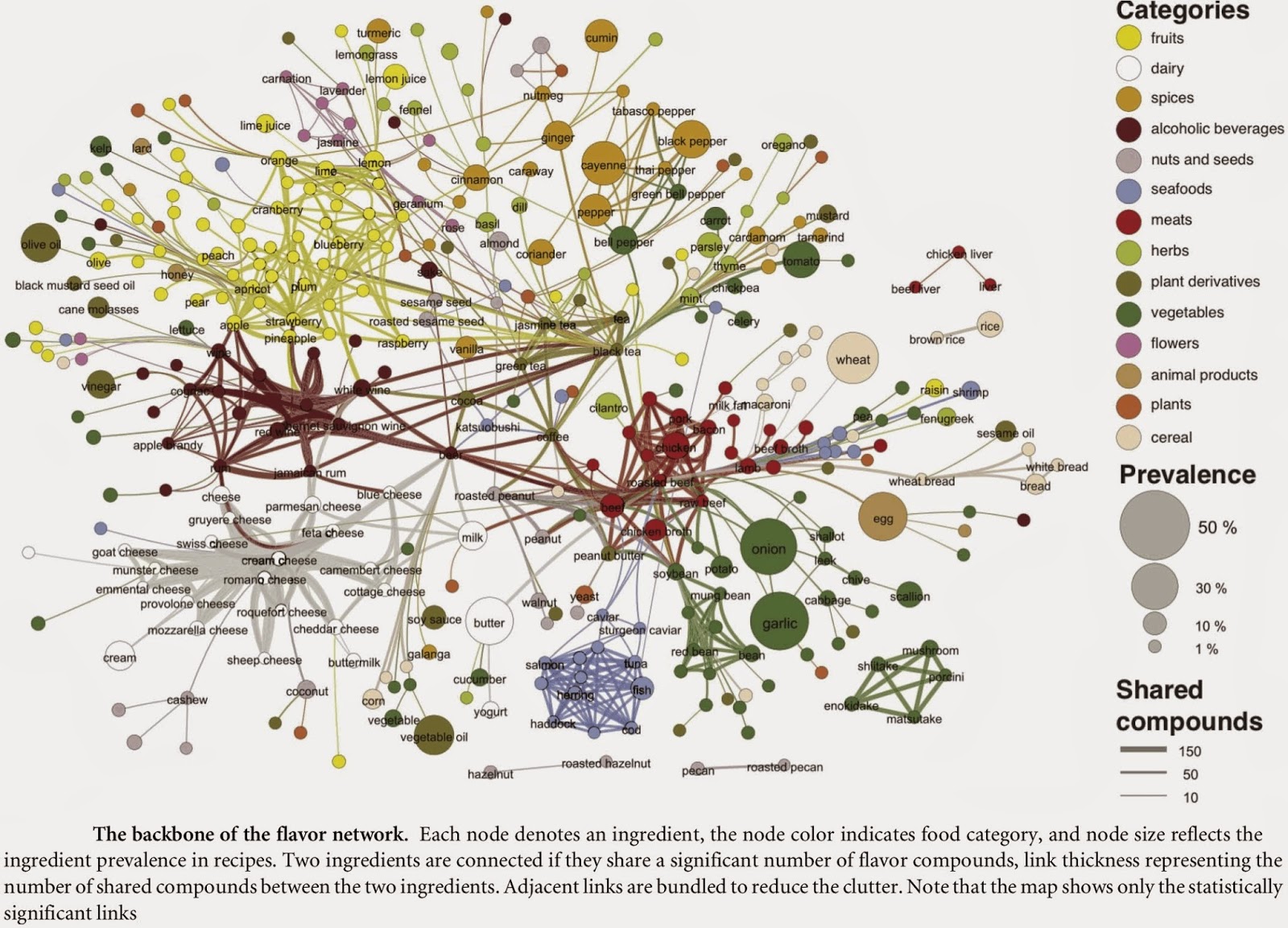 Interestingly, they conclude that:


We introduce a flavor network that captures the flavor compounds shared by culinary ingredients. Western cuisines show a tendency to use ingredient pairs that share many flavor compounds, supporting the so-called food-pairing hypothesis. By contrast, East Asian cuisines tend to avoid compound-sharing ingredients.

There is diversity even in the amount of diversity.