I recently published a post on Evolution and timelines, in which I pointed out that presenting historical data as a timeline is a very poor way of representing an evolutionary history. Evolutionary history is much better presented as a phylogeny, which will be either a tree or a network. However, this does not mean that all histories that are presented as a tree, for example, necessarily represent a phylogeny.

I have encountered a few examples of history-as-tree that seem to have very little connection to a phylogeny. That is, the relationships among the objects are presented along the branches of a tree, but the relationships along the branches seem to be little more than a timeline. So, the whole structure is simply a series of interconnected timelines.

Consider this first example, which is a poster purporting to show for the USA:


the evolution of jazz in its more than one hundred year history. From Archaic to Avant Garde, from blues to bebop, from radio to fusion, from spirituals to swing, from Armstrong to Zawinul, the jazz pedigree presents the diverse history and development of jazz in a clear way. 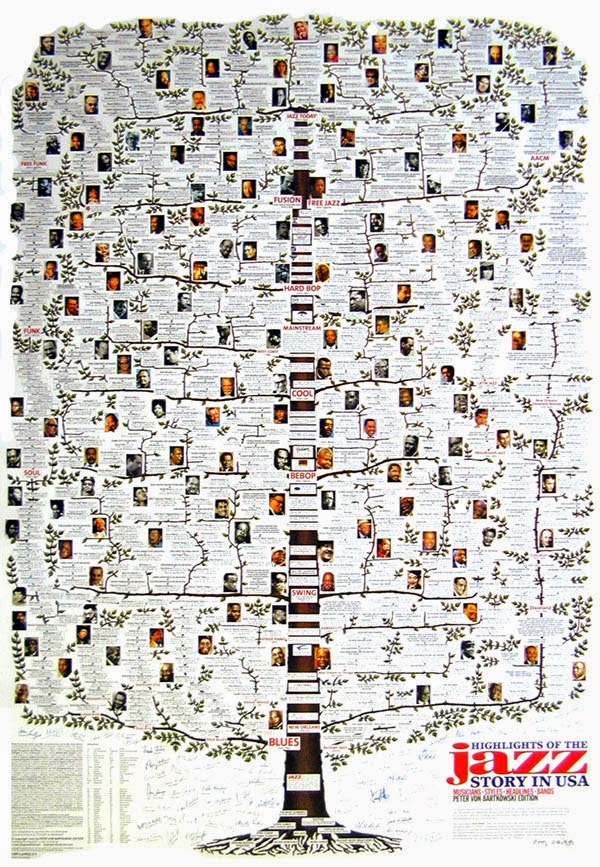 Perhaps it is the strong central trunk that gives it away as a non-phylogeny. The side-branches do group the jazz performers roughly by genre, but that is all they do. The actual title is a bit more accurate about the content — it is a "Story" rather than a phylogeny.

This poster is accompanied by a European counterpart with an even stronger central trunk. It is labeled as a "Community", but it still claims to "display the history and development of European jazz". 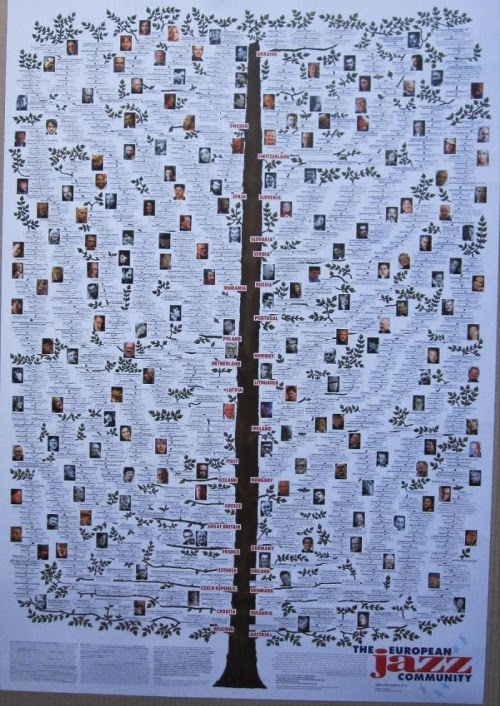 As another example, in 1946, the magazine P.M.published a tree by Ad Reinhardt with a sardonic view of modern American art. [Thanks to Joachim Dagg for alerting me to this example.] 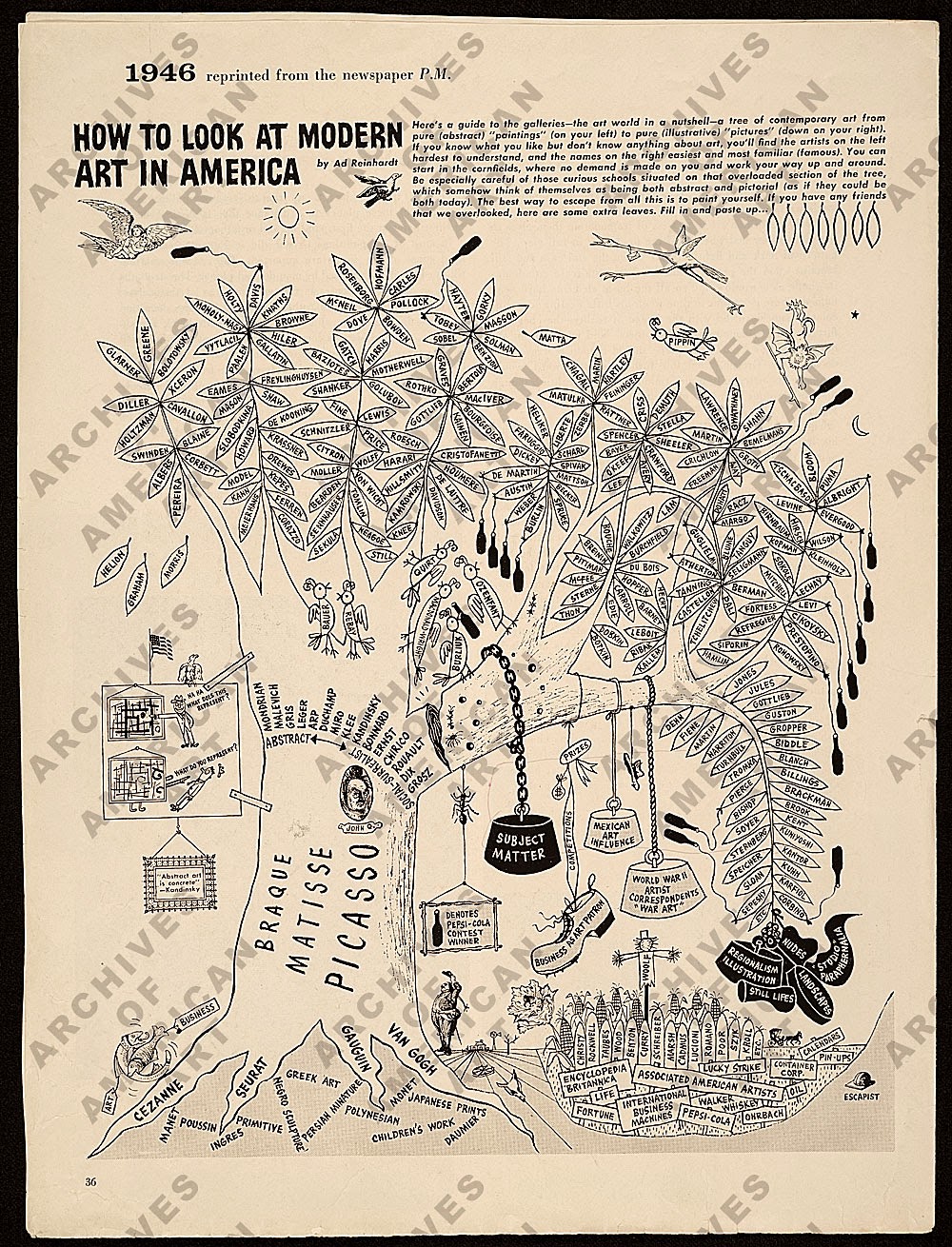 At least there is no central trunk this time, but the clustering of artists along the branches seems to have less to do with phylogenetic history than with artistic genre (and satire). There was a follow-up example 15 years later, in which the sardonic humor plays much the strongest role in the relationships represented. 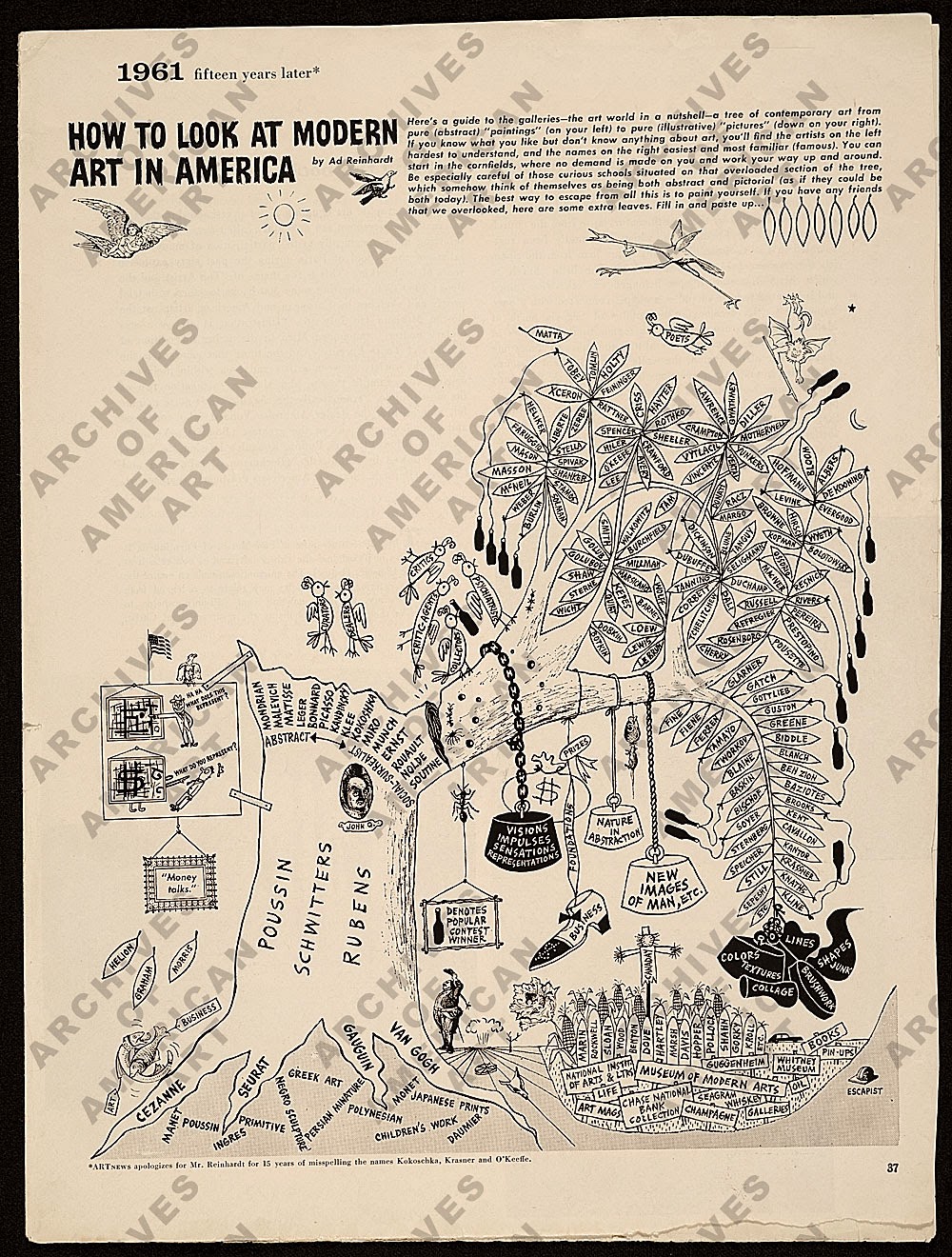 Finally, here is an example of a timeline that really should be represented using a phylogenetic tree. It is difficult to believe that the group of professions illustrated form a transformational series, as implied by the timeline that is actually shown. Most of the entrepreneur groups depicted actually still exist to this day, rather than being extinct, and so we have here a history of variational evolution, instead of a transformation.