Consanguineous relationships involve people who are first cousins or more closely related. Apparently, about 15 percent of all marriages worldwide involve consanguineous partners, although this number has been higher in the past (Bittles 2012).

Our interest for this blog is that such relationships emphasize that so-called family trees (pedigrees) are hybridization networks not trees (see Pedigrees and phylogenies are networks not trees). Everyone can trace their maternal and paternal ancestors back into the past to a point where the lineages fuse again, and consanguineous marriages mean that this happens in the recent past rather than the distant past. To this end, we have had posts about Charles Darwin (Charles Darwin's family pedigree network), Henri Toulouse-Lautrec (Toulouse-Lautrec: family trees and networks) and Albert Einstein (Albert Einstein's consanguineous marriage). Not unexpectedly, it is royalty that provide the best-known examples (see Family trees, pedigrees and hybridization networks).

However, many cultures have taken consanguinity even further, as noted by Dobbs (2010):


While virtually every culture in recorded history has held sibling or parent-child couplings taboo, royalty have been exempted in many societies, including ancient Egypt, Inca Peru, and, at times, Central Africa, Mexico, and Thailand [and also Hawaii].

The reference to ancient Egypt includes both Cleopatra and Tutankhamun, each of whom was part of a dynasty that apparently adopted the practice of incest. As noted by Wikipedia:


In ancient Egypt, royal women carried the bloodlines and so it was advantageous for a pharaoh to marry his sister or half-sister; in such cases a special combination between endogamy and polygamy is found. Normally the old ruler's eldest son and daughter (who could be either siblings or half-siblings) became the new rulers. 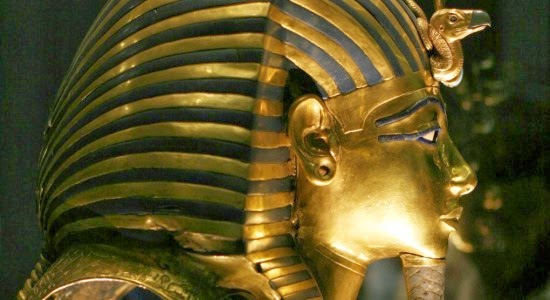 Tutankhamun briefly ruled as Pharaoh from 1333-1323 BCE, at the end of the Amarna period, the 18th Dynasty. His failure to leave an heir ended the direct line of succession, and ultimately resulted in the transition to the 19th Dynasty, started by Rameses I. Tutankhamun seems to have been a rather minor king, becoming ruler at age 9 and dying at 19. He was surrounded by the power struggle that resulted from his father's attempt to found the first monotheistic religion, and being a minor he probably had little influence on the events of the time (Antanovskii 2013).

He became famous in 1922, when his near-intact tomb was discovered. He had been buried in a tomb not intended for royalty, and its location and even existence was quickly forgotten at the time — due to the political turmoil, his successors had deleted nearly all traces of the Amarna kings. In a classic case of irony, this situation made Tutankhamun's tomb safe from the robbers who removed much of the contents of other tombs in the Valley of Kings. Thus, more than 5,000 artifacts were found in his tomb, along with the well-preserved mummies (see the death mask pictured above). This has made Tutankhamun a better-known name ("King Tut") than that of anyone else from his period.

A note on names: Tutankhamun's father was Amenḥotep IV, who tried to replace the polytheistic worship associated with Amun (or Amen) and the other gods of the national pantheon with the monotheistic worship of Aten ("the disk of the sun"). He thus changed his name from Amenhotep ("Amun is satisfied") to Akhenaten ("beneficial to Aten"). His son was named Tutankhaten ("the living spirit of Aten"), but this was changed to Tutankhamun ("the living spirit of Amun") when the state religion was restored during his reign.

The history of the period surrounding Akhenaten and Tutankhamun is particularly confused, as Tutankhamun did not become pharaoh until 2 years after his father's death (Hawass 2010; Gabolde 2011). Nevertheless, the preservation of Tutankhamun's tomb has allowed us to reconstruct a possible genealogy for this period, as shown next.

Hawass et al. (2010) compared the DNA of the mummy of Tutankhamun with that of 10 royal mummies from the same period, ranging from 1,410 to 1,324 BCE. The mummy of the genetically identified father, found in grave No. 55 of the Valley of Kings, is considered to be Akhenaten. The identified mother, found in grave No. 35, was also identified to be the sister of Akhenaten. This is surprising, because only two wives of Akhenaten, Nefertiti and Kiya, are known to have had the title of Great Royal Wife, which the mother of the royal heir should bear.


An accumulation of malformations in Tutankhamun's family was evident. Several pathologies including Köhler disease II were diagnosed in Tutankhamun; none alone would have caused death. Genetic testing for genes specific for Plasmodium falciparum revealed indications of malaria tropica in four mummies, including Tutankhamun's. These results suggest avascular bone necrosis in conjunction with the malarial infection as the most likely cause of death in Tutankhamun. Walking impairment and malarial disease sustained by Tutankhamun is supported by the discovery of canes and an afterlife pharmacy in his tomb.

Incestuous marriages were nothing new to the pharaohs of Dynasty 18 (see Ian Mladjov's detailed genealogy). Part of the genealogy of its founding is shown in the next figure. Aahotep I and Sequenenra III were sister and brother, as were Aahmes-Nefertari and Aahmes (or Ahmose II). Aames (or Ahmose III) and Thotmes I were either sister and brother or half-siblings (the records are unclear).


Finally, it is worth noting that Marc Gabolde has an alternative explanation for the apparent genetic closeness of King Tutankhamun's parents (see Powell 2013). He suggests that Tutankhamun's mother was not his father's sister, but rather his father's first cousin, Nefertiti. The apparent genetic closeness is then not the result of a single brother-sister mating but due to three successive instances of marriage between first cousins. Nefertiti is recorded to have had six daughters with Akhenaten, but no son.

Powell A (2013) A different take on Tut. Harvard Gazette.