It is widely known that Charles Darwin was married to his first cousin Emma Wedgwood. Emma came with a substantial dowery, being the grand-daughter of Josiah Wedgwood, the founder of the Wedgwood pottery firm (as, indeed, was Darwin himself, via his mother). Darwin already had a substantial allowance from his own father (a successful physician, real estate speculator, investor, and money lender), and the combined incomes allowed him to live the life of a "gentleman of independent means". He thus conducted his scientific work unhindered by the practical concerns of the rest of us. 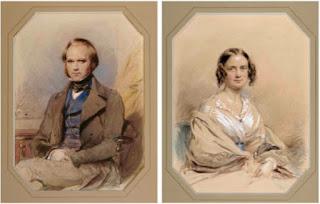 What is perhaps less well known is that Darwin was interested in (and concerned about) the genetic effect on his children of his consanguineous marriage. He performed many experiments on inbreeding in plants, and demonstrated that the offspring of cross-fertilized plants were more vigorous and numerous than the offspring of self-fertilized plants. It occurred to him that the same thing might be true for animals, as well, including humans.

Furthermore, he thought that this might be an explanation for the unhealthy nature of his own children. Three of his ten children died young, and three more of them had long-term marriages that produced no offspring (implying infertility). These data stand out even within the Darwin-Wedgwood families, let alone outside it.

Part of the Darwin / Wedgwood pedigree is shown in the figure, which is taken from the 2010 paper by Tim M. Berra, Gonzalo Alvarez and Francisco C. Ceballos (Was the Darwin / Wedgwood dynasty adversely affected by consanguinity? BioScience 60: 376-383). Note that the family tree is drawn as a hybridization network (also called a "path diagram"), rather than a traditional family tree, which is an important point that I have previously emphasized for pedigrees (Family trees, pedigrees and hybridization networks).

The diagram shows only four of the people from Darwin's children's generation (including only one of his own children), but all four of these people (and their unshown siblings) are the offspring of first-cousin marriages. Indeed, Louisa Frances Wedgwood's parents were double first cousins (ie. they were cousins via both of their parents). These consanguineous marriages all involved the children of Josiah Wedgwood II (they are four of his eight children who survived to adulthood) — this is not a family tradition that should be encouraged. (You will note that Darwin's sister Caroline married Emma's brother Josiah III, thus literally keeping everything in the family.)

Darwin did not have easy access to these data, of course, but they justify his concern for the effect on humans of inbreeding. Indeed, he went so far as to suggest that the 1871 British census should enquire about consanguineous marriages ("the returns would show whether married cousins have in their households on the night of the census as many children as have parents who are not related; and should the number prove fewer, we might safely infer either lessened fertility in the parents, or which is more probable, lessened vitality in the offspring"). This suggestion was not implemented.

However, his son George (the oldest fertile child) did persue the matter of inbreeding. Indeed, he introduced the idea of using the frequency of occurrence of the same (birth) surname among married couples as a means to study the level of inbreeding in a population. Such surname models are still used in human population biology today.


Incidentally, many other famous people have married their first cousin, although unlike Darwin they did not necessarily have any children with them. For example, Albert Einstein married Elsa Löwenthal (née Einstein), his first cousin through their mothers and second cousin through their fathers; however, his three children were from his relationship with his first wife, Mileva Marić. H.G. Wells' first marriage was to Isabel Wells, a first cousin, but his four children were with his second wife and two of his lovers. Edgar Allan Poe's only marriage was to his cousin Virginia Clemm, but they had no children. [See the later post: Albert Einstein's consanguineous marriage]

Sadly, there are also well-known cases where the offspring of first cousins seem to have suffered badly. Perhaps the best known of these is the artist Henri de Toulouse-Lautrec. Henri's two grandmothers were sisters, so that his parents were first cousins, and he suffered from congenital health conditions that are usually attributed to genetic disorders. For example, Henri fractured his right thigh bone when he was 13 and his left at 14, and the breaks did not heal properly. His legs ceased to grow, so that he achieved the shape for which he is best known, with an adult-sized torso but child-sized legs. He died at the young age of 36. [See the later post Toulouse-Lautrec: family trees and networks]

First-cousin marriages have declined significantly since Darwin's time. According to Adam Kuper (2010. Incest and Influence: the Private Life of Bourgeois England. Harvard University Press), cousin marriages have declined from 1:25 marriages (among the upper middle classes) in the 19th century to 1:6,000 in the 1930s and 1:25,000 in the 1960s. Kuper's book provides an interesting insight into why such marriages were previously so common among the upper bourgeoisie and why they are much rarer now.