In 1965, Christopher Alexander published a classic paper called A City is Not a Tree, in which he pointed out to town planners that human beings naturally arrange themselves spatially in networks, not in the neatly ordered tree-like arrangements then in favour. So, road and rail systems, for example, should be inter-connected networks rather than bifurcating trees leading to / from a single root (e.g. a Central Station). The classic image of a rail system as a network is the one produced by Harry Beck in 1931-1933 that illustrates the London underground as a circuit diagram, which is now widely imitated.


This image has inspired other network makers, including Tom Crosbie, a professional magician from the UK. He has recently produced the following diagram, which illustrates some of the characteristics shared by a large number of the world's magicians. Note that much of the complexity comes from trying to illustrate each characteristic separately. 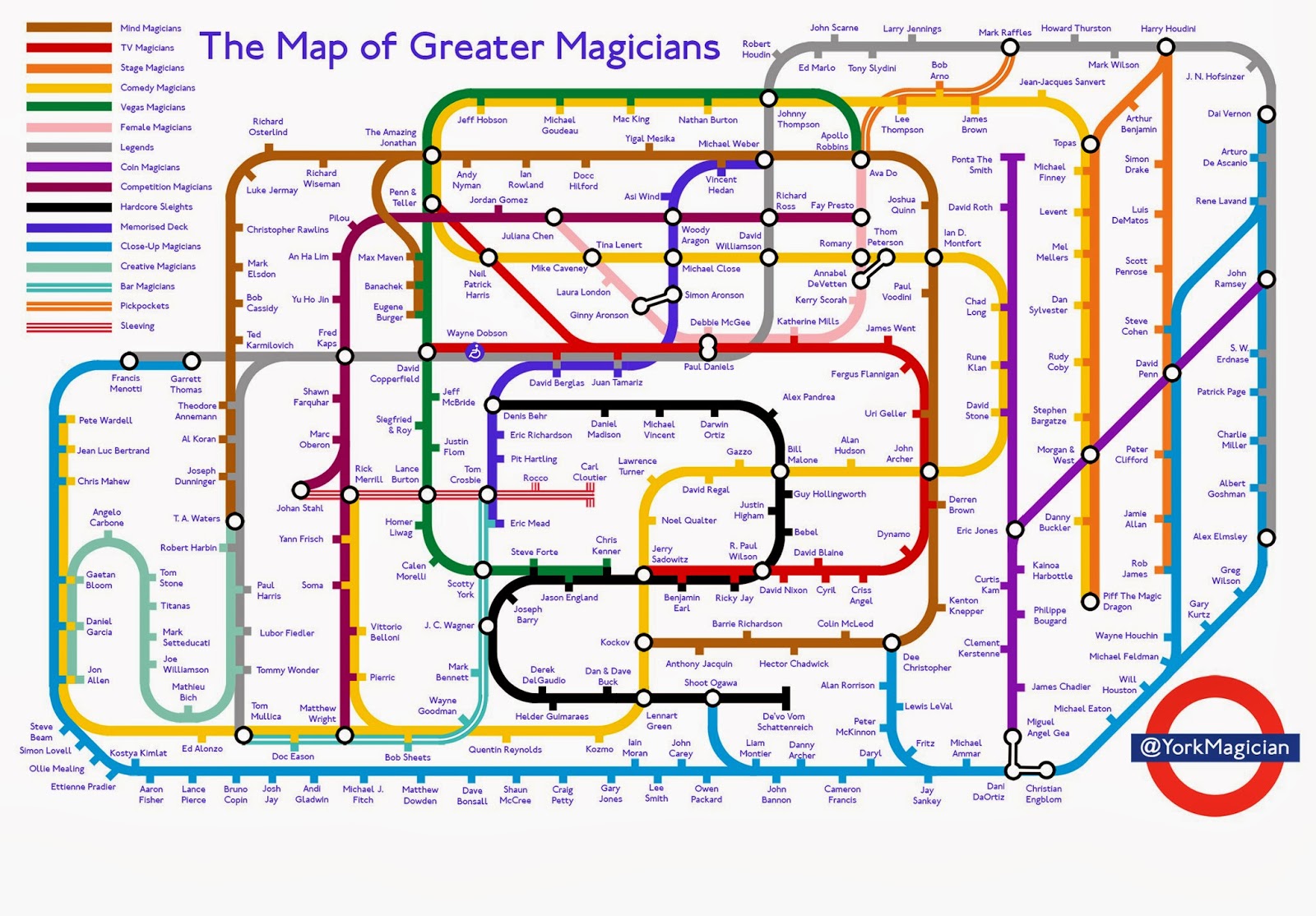 Some parts of the diagram do not make sense. Why, for example, are Apollo Robbins and Ava Do apparently at the same point? And also Mike Caveney and Tina Lenert? Why do only Penn & Teller have four intersecting lines, and no-one else?

It is, of course, easy to recognize the limitations of the sampling, since it is heavily biased towards English-language magicians. In particular, in spite of the existence of a "Competitions" category, even a cursory look at the Fédération Internationale des Sociétés Magiques (FISM) World Championships of Magic winners, shows that many recent Grand Prix recipients are missing, including Ivan Necheporenko (Russia), Vladimir Danilin (Russia), Franklin (Germany), Norbert Ferré (France), Jason Latimer (USA) and Rick Merrill (USA). From the German collective known as The Flicking Fingers, only Pit Hartling is included, but not Nicolai Friedrich, Manuel Muerte or Gaston, each of whom has two FISM titles, nor Thomas Fraps or Jörg Alexander, both of whom have one. The absent Arsene Lupin (Poland) has also been a consistent title winner (three times).

Recent UK magicians such as Young & Strange are included but Brynolf & Ljung (Sweden) are not. Very few Asian magicians are included, who have dominated much of the recent talk about magic; notably absent are Han Seol Hui and Kim Hyun Joon. Also, absent is Xavier Mortimer (France), the most prominent on the practitioners who see magic as a performance art (he combines mime, music and illusion). You can add your own list of favourite absentees.

This is not an example of a phylogenetic network, of course, since the people are directly connected rather than connected via inferred ancestors.