The question has been asked as to which of the current general books about phylogenetics actually cover phylogenetic networks. There are collections of essays where networks are covered, and there are specialist books, of course, but the question here is about general introductory books. While a number of books mention tree incongruence, and that this phenomenon could be represented using a reticulating graph, there appear to be only two books that specifically cover the topic of phylogenetic networks. 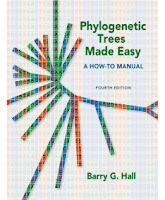 The first three editions (2001, 2004, 2008) discussed trees only, but the fourth edition has added a chapter on networks. Chapter 15 (pp. 219-248) explicitly notes that "The material presented here is drawn almost entirely from the new book Phylogenetic Networks: Concepts Algorithms and Applications", which is also noted was "made available to me in manuscript prior to its publication."

The first three sections are theoretical introductions to the topic, and the final two sections proceed through a worked example (a different one each).

The book provides a basic introduction to phylogenetics, which is its intent. So, the network topics are presented in a straightforward manner, which makes them easy to grasp. The worked examples are cookbook style, intended solely to get you started using the two chosen computer programs.

The author is to be congratulated for producing not only the first, but so far the only, general book that covers evolutionary networks.

The first edition (2003) had a chapter on SplitsTree by Vincent Moulton, and this was revised in the current edition to Split Networks: a Tool for Exploring Complex Evolutionary Relationships in Molecular Data, Chapter 21 (pp. 631-653), by Vincent Moulton and Katharina Huber.

The chapter provides a general introduction to the theory of splits graphs and their uses; and the practical exercises use SplitsTree. This was the first general book on phylogenetics to include networks, although evolutionary networks are not covered.

The coverage of networks is the final topic in the book in both cases, so it can hardly be claimed to have an important place. Nevertheless, these books are at least one step ahead of their competitors.

All of these books are examples of the contemporary focus on congruent tree patterns in evolution, with reticulate relationships being almost an afterthought. There is nothing in the word "phylogeny" that specifies a shape for evolutionary history — it comes from the Greek phylon "race" + geneia "origin". Evolutionary groups may arise by either vertical or horizontal processes, and so evolution may be tree-like or it may not. The current focus almost exclusively on trees is therefore somewhat misplaced.