Charles Darwin is usually considered to be the person who first explicitly used a tree as a metaphor (or, in his words, a simile) for genealogical history in the modern sense. Lamarck's earlier tree-like diagrams were intended as transformation series among species (based on morphoclines), and thus showed historical descent with modification, but they were not concerned with diversifying evolution in the manner envisioned by Darwin. Previously published diagrams by other authors were concerned with showing "affinity" that was not necessarily genealogical (see previous post).

It therefore perhaps comes as something of a surprise that Darwin never published an empirical phylogenetic tree. His only published diagram (in The Origin of Species) was entirely theoretical. Indeed, it expressed his doubt that empirical trees could be constructed, by not connecting many of the branches, thus indicating knowledge that he felt was impractical to obtain due to the paucity of the fossil record. (Or, as he put it in Notebook C in 1838: "The bottom of the tree of life is utterly rotten & obliterated in the course of [the] ages.") It was thus left to Fritz Müller in 1864 and St George Mivart in 1865 to publish the first known trees, followed by Franz Hilgendorf, Albert Gaudry and Ernst Heackel in 1866 (Bigoni & Barsanti 2011, Tassy 2011) (see also Who published the first phylogenetic tree?).

Nevertheless, trees appear as sketches in Darwin's notebooks, note portfolios and book drafts, both before and after The Origin was published (1859), and at least one is an attempt at an empirical tree. These notes and drafts can be viewed online at The Complete Work of Charles Darwin Online. However, it seems to me to be worthwhile gathering in one place all of the sketches of which I am aware. I have provided copies here, in approximate chronological order, as well as links to the original in CWCDO.

This is Part 1 of a three-part series. It covers the tree sketches housed in the Darwin Archive at the Cambridge University Library. Part 2 covers sketches in a Darwin letter housed in the library of the American Philosophical Society. Part 3 discusses a possible tree in one of Darwin's published books. See also the post on Predecessors of Charles Darwin.

Note: This post has been updated since its was first published, to include several additional sketches.

The first pair of sketches is from page 26 of Notebook B, on "Transmutation of species"
(dated 1837-1838). They are not actually trees, but instead consider Darwin's idea that maybe a coral would be the best metaphor (due to the existence of dead "branches"). Darwin had, of course, studied corals extensively on the Beagle voyage, and in May 1837 read a paper before the Geological Society about his theory for the development of coral reefs. 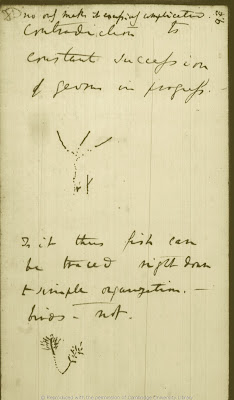 The text on pages 25-26 is reported to be:
[p.25 bottom] The tree of life should perhaps be called the coral of life, base of branches dead; so that passages cannot be seen. — this again offers [p.26 top] contradiction to constant succession of germs in progress
[note at very top] no only makes it excessively complicated
[between the sketches] Is it thus fish can be traced right down to simple organization. — birds — not.

The next sketch is the most famous one, these days even appearing on many tattooed persons. It is from page 36 of the same Notebook B. 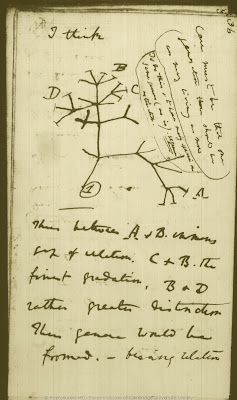 The text on pages 36-37 is reported to be:
[top] I think
[first note] Case must be that one generation then should be as many living as now
[second note] To do this & to have many species in same genus (as is) requires extinction
[below figure] Thus between A & B. immense gap of relation. C & B. the finest gradation, B & D rather greater distinction. Thus genera would be formed. — bearing relation [p.37] to ancient types. — with several extinct forms for if each species an ancient (1) is capable of making 13 recent forms. [there are 13 lines in the sketch that have a perpendicular line at the end] Twelve of the contemporarys must have left no offspring at all, [there are 12 lines that are without a perpendicular line at the end] so as to keep number of species constant.

The next five sketches are from the Collection of notes on "Principle of divergence, transitional organs/instincts" (dated 1839-1872). The sketches are pages torn out of the earlier notebooks and collated into the portfolio.

The first sketch is on the back of a page numbered 90, which is dated July 1843. It continues Darwin's search for a good phylogenetic simile. 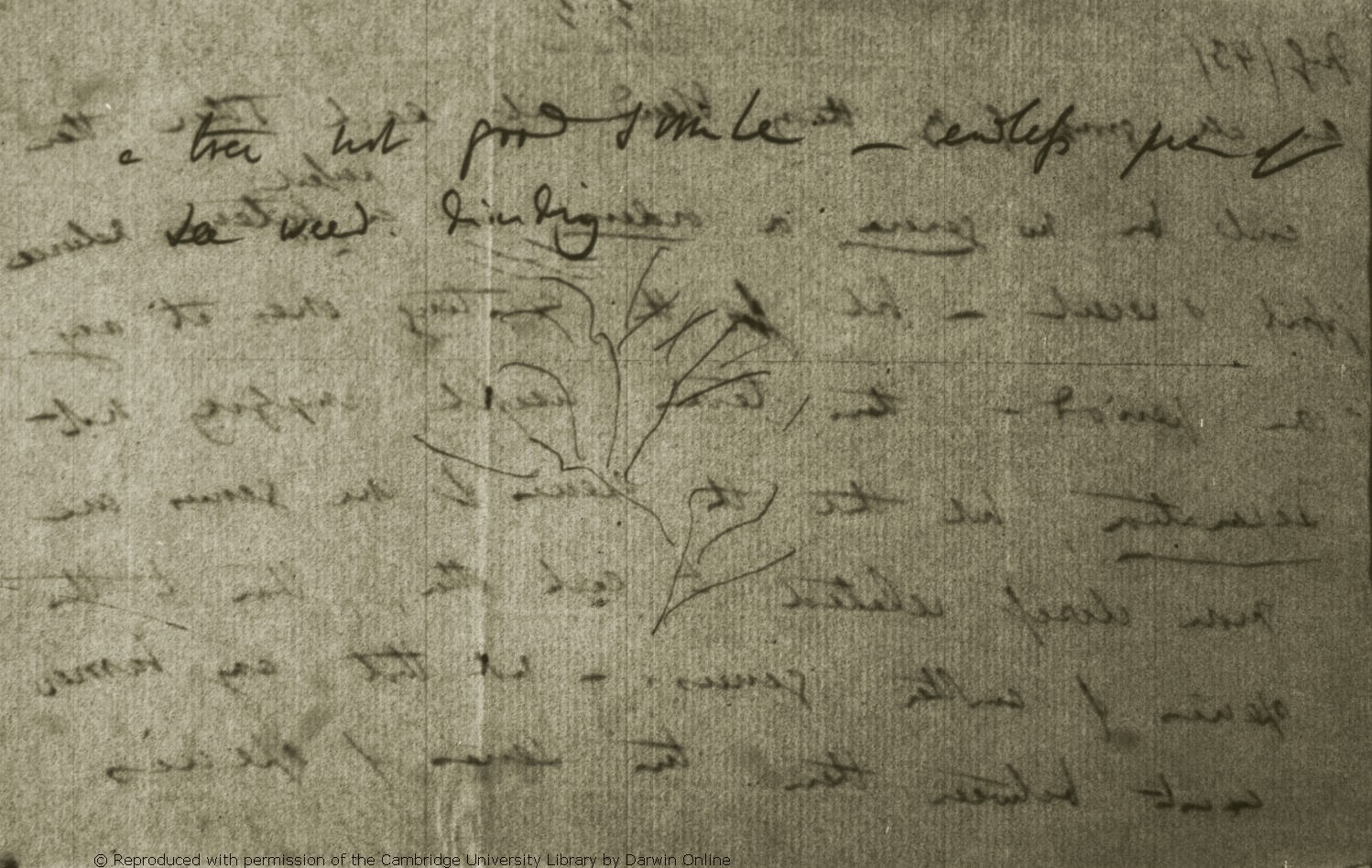 The text appears to be:
a tree not good simile — endless piece of sea weed dividing

The second sketch is on the back of a page numbered 127, which is dated December 1848. 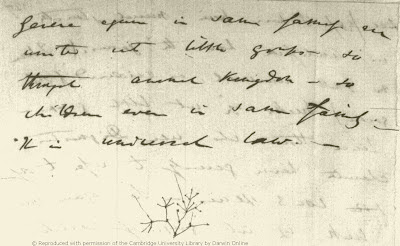 The text appears to be:
Genera again in same family are united into little groups - so throughout animal Kingdom - so children even in same family - It is universal law.

The next sketch is on a page numbered 183. It and the next two sketches are undated but are considered to be "early 1850s". This one considers a general concept of mammal history but without naming most of the groups. 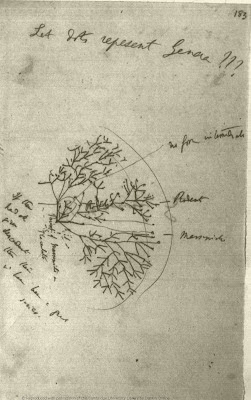 The text appears to be:
[top] Let dots represent Genera ???
[note at far left] If these had all given descendants then these w.[would] have been a great series.
[note at tree base] Parents of Marsupials and Placentals
[note within tree] Rodents
[notes at right] no form intermediate
Rodents
Marsupials

The next sketch is on a page numbered 184 ("early 1850s"). It considers the relationship between genealogical trees and geological history. 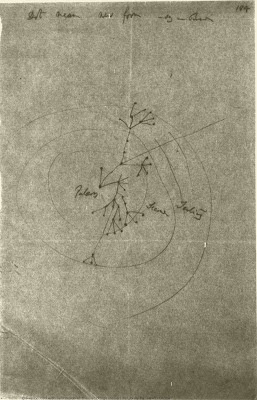 The next sketch is on the back of the page numbered 184. It looks somewhat like a draft or a repeat of Figure 4. 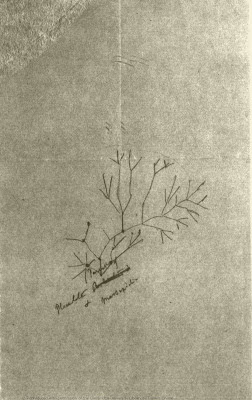 The text is the same as for the earlier figure:
Parents of Placentals and Marsupials

The next sketch is from the Collection of notes on "Embryology", dated 1852-1855. The sketch is on the back of a flyer for Edward Strong Printing Office and Stationery Warehouse. 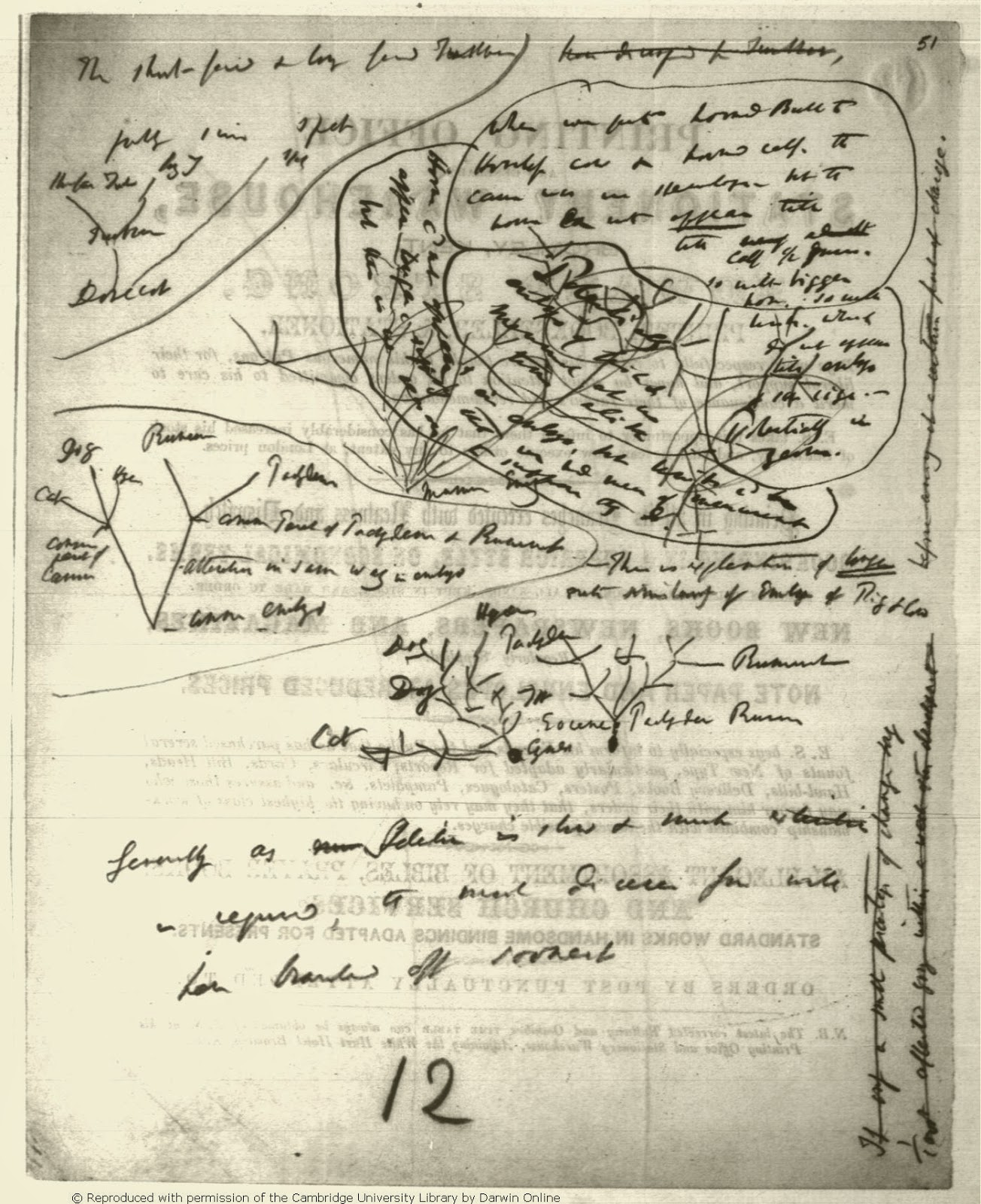 This page has at least five trees on it, with the largest of them over-written with several pieces of text. Darwin appears to be struggling with alternative ideas about the role of embryology in the evolution of mammalian and bird groups.

I will not attempt to interpret it here. However, Archibald (2014) has a figure (Figure 4.9 on page 94) that tries to elucidate most of the text.

This sketch is one that will look vaguely familiar to anyone who has read The Origin of Species. It appears between pages 26R & 26S of Darwin's draft book on Natural Selection (sometimes referred to as his Big Species Book). This was the book originally intended to introduce Darwin's ideas to the world (written from 1856-1858), but which he had to abandon once he realized that Alfred Wallace had independently deveoped the same general ideas. 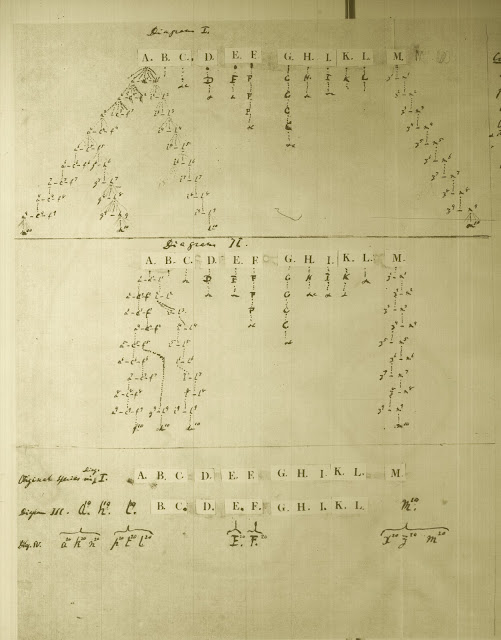 This picture is thus the draft version of the tree that appears in The Origin, as Chapter 6 of Natural Selection was summarized as Chapter 4 of The Origin. Interestingly, the initial draft of the chapter (called "On Natural Selection") was completed by the end of March 1857, but a year later (mostly between April and June 1858) Darwin revised and expanded it, particularly by interpolating a new discussion of the "Principle of Divergence" that was 40 pages long (Stauffer 1975). The figure appears as a prominent part of this later addition. Apparently, it took Darwin some time to realize the importance of divergence for his book — important enough to warrant the only illustration.

Note that the tree is upside down as compared to the final version in The Origin, presaging modern uncertainty about which way to draw a "tree". Perhaps this was a switch from the usual top-down way of drawing human pedigrees to one that more closely matched his discussion of the fossil record, which is conventionally drawn bottom upwards. Since Darwin does not call the diagram a tree, the usual orientation of botanical trees presumably played no part.

Also, in many ways this draft is more complicated than the published one, with much more in the way of annotations. The subsequent simplification is typical of the relationship between Natural Selection and The Origin, as the latter was intended to be an "abstract" of the former.

The diagram is accompanied by this text:
Compositor: To be printed on separate page to be folded out and so all exposed. Attend to distance of capital letters from each other; the letters had better be smaller: Attend to chains of dots and hyphens. The numbers to small letters to be the very smallest possible. The capital and other letters in each Diagram to match exactly in position. — I hope the 4 Diagrams will go in length of page.

The final two sketches appear among the material gathered for preparation of the 1st edition of The Descent of Man (1871). They represent the only explicitly empirical trees that I know of among Darwin's notes (although see the sketches in Part 2), depicting primate relationships.

This one appears to be an initial draft of the next sketch. It is undated but is considered to be 1862-1865. 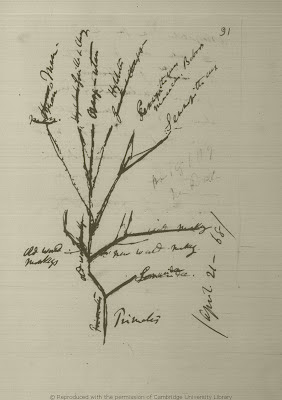 Darwin's progressive thought processes are clearly indicated by the successive versions of the figure and the many erasures (sometimes replacing a word with itself!). He seems to be trying to work out how best to present the diagram, rather than revising its content. Interestingly, the placement of Homo near the Simians seems to owe more to St George Mivart's 1865 tree of Primates than to Mivart's more detailed 1867 tree, where Homo is placed somewhat further away (see Bigoni & Barsanti 2011).

It is worth noting that Darwin does not explicitly call any of these diagrams a "tree". In both Natural Selection and The Origin he refers to the Tree of Life at the end of the chapters containing the figures (see Penny 2011), and later in those books he refers to relationships as being "somewhat like the branches of a tree", but neither of these is a direct reference to any diagram. Darwin's point in using the figures was to describe a continuous process of diversification and extinction, and in doing so he drew a multi-branched bush (with episodic speciation) rather than a single-stemmed tree. This idea seems to have gone astray since then, and our current focus on trees thus misses much of what Darwin was trying to tell us.

Mivart St G. (1865) Contributions towards a more complete knowledge of the axial skeleton in the Primates. Proceedings of the Zoological Society of London 33: 545-592.

Mivart St G. (1867) On the appendicular skeleton of the Primates. Philosophical Transactions of the Royal Society of London 157: 299-429.

Tassy P. (2011) Trees before and after Darwin. Journal of Zoological Systematics and Evolutionary Research 49: 89-101.