In Part 1 of this series I discussed those unpublished tree sketches housed at The Complete Work of Charles Darwin Online. In particular, I noted that there is only one empirical phylogenetic tree in that collection. This post updates the information to include the other empirical trees that I know of. Part 3 discusses another possible tree, in one of Darwin's books.

Note: Several months after this blog post was written the following paper was published: Archibald JD (2012) Darwin's two competing phylogenetic trees: marsupials as ancestors or sister taxa? Archives of Natural History 39: 217-233. This paper reproduces both manuscript diagrams and discusses them in detail. The post has been updated accordingly.

The first Diagram posits separate monophyletic origins of Placentals and Marsupials from a non-placental non-marsupial ancestor, whereas the second one derives Placentals from with the early Marsupial group.

This letter has been published in both (i) The Life and Letters of Charles Darwin, Vol. II (1887) edited by Francis Darwin (London: John Murray), pages 341-344, and in (ii) The Correspondence of Charles Darwin, Volume 8: 1860 (1993) edited by Frederick Burkhardt, Janet Browne, Duncan M. Porter & Marsha Richmond (Cambridge: Cambridge University Press), as Letter #2925. Neither of these reproduces the original diagrams, but instead adopts the "practice to replace any handwritten annotations to the image with typeset text." 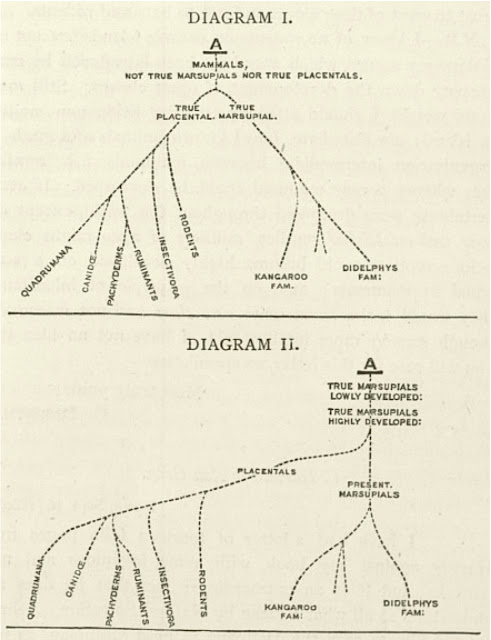 I have included here the typeset version from Life and Letters. Note that it incorrectly replaces Darwin's original "Carnivora" with "Canidae" (Correspondence gets it right), and resolves Darwin's polychotomy.

The relevant text from the letter is (including odd spellings and grammar):
I enclose two diaggrams showing the sort of manner I conjecture mammals have been developed: I thought a little on this when writing p. 429 [of The Origin] beginning "Mr. Waterhouse".— (Please read the paragraph.) I have not knowledge enough to choose between these two diagrams; if the Brain of Marsupials in embryo closely resembles that of placentals, I shd. strongly prefer nor. 2, & this agree with antiquity of microlestes. As a general rule I shd prefer nor. I diagram. whether or not Marsupials have gone on being developed or rising in rank from a very early period would depend on circumstances too complex for even a conjecture: Lingula has not risen since Silurian epoch, whereas other Molluscs may have risen.

The text accompanying the illustrations is:
A. Unknown form, probably intermediate between reptiles Mammals, Reptiles and Birds as intermediate as Lepidosiren now is between Fish and Beatractians.— probably more This unknown form is probably more closely related to Ornithorhynchus than to any other known form.—

As noted by Archibald (2012), this letter clearly shows Darwin's understanding of homology and how it relates to monophyletic groups. Given that it was written within a year of publishing the Origin, it is his earliest use of an empirical phylogeny, as well as the only time he compared two trees for the same taxa.

These days, the consensus is that Diagram I is the correct one.