A sneak peek into the upcoming SplitsTree 5


For some time now, the official SplitsTree page (www.splitstree.org) has been offline. The reason is that a major update is on the way: SplitsTree5. A beta version is already available, so let's take a quick look at it.

During installation you will be asked how much RAM you want to dedicate. Give as much as possible, in case you want to handle large tree with myriads of splits. I chose 16 GB (ie. half of the RAM installed on my PC).

Here's how it looks when you start the program: 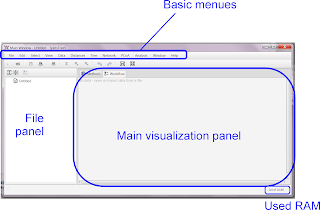 The menus known from SplitsTree4 are still there, and the important functions appear to be already implemented. Some are new, and some have been moved:
The new GUI reminds me a bit of RStudio —instead of pop-up windows vanishing once you perform a function, you will keep subsequent sheets in the panels. This makes it easier for new users.

When opening a data matrix not directly interpretable, you may activate the "Import" menu, asking you to specify the data type and the file format: 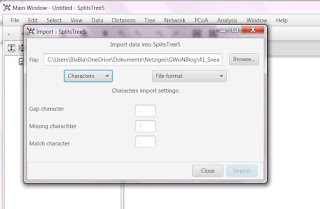 Eventually, as in SplitsTree4, the importer is currently sensitive to additional code and commentary brackets, and cannot eg. handle polymorphisms for categorical data (such as "(01)", "{01}"). Accordingly, importer warnings will pop up. Probably, a lot of testing and tweaking is required to make this work as planned. The selection list for file formats is comprehensive, but also ambitious. It may be a good idea to focus on a simple import format (eg. Phylip without its name-length restrictions, or clean NEXUS), and leave the import / export issues to other software packages (such as Mesquite, or R-conversion tools).

But we can read in Splits-NEXUS files generated by SplitsTree4 without any problems. To sneak a bit more: 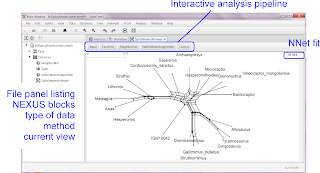 A very nice function is that the flags in the analysis pipeline are fully interactive, allowing for quick manipulation / overview of what was used. For example, by clicking on "NeighborNet", we get a new panel for tweaking the NNets options or change the used method: 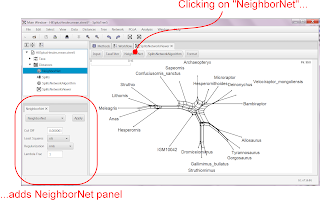 When moving above a menu item, a short explanation may pop up. The menus in the modification panel include drop-down boxes and input fields (here, for NNet):


Another important upgrade is the "Workflow" sheet, which gives you access to data filtering, methods and visualization etc., by just double-clicking on the respective item in the flow-chart (items can be dragged and moved, too): 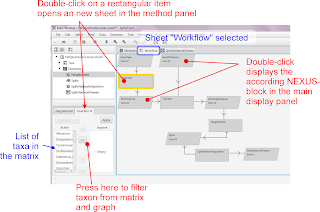 Graphically, SplitsTree5 is functional as well. View > Format... (Ctrl-Shift-J) will open the remodeled coloring and type window in the method / lower left panel, where you can chose: font, label and (selected) edge(s) colors, node colors and shapes. In addition to circles and squares, we now have the choice between up- and down-triangles, diamonds, and hexagons. The graphical export option is gone (Ctrl-Shift-M; for now) and replaced by a modifiable, objects-containing PDF (similar to the ones produced by Dendroscope), generated simply by printing out to PDF.

The current beta version may not be able to fully replace SplitsTree4 yet (especially since the current manual only contains an 'Acknowledgments' section) but has already enough functionality (some new) to play around and explore the wonderful world of phylogenetic networks.

So, try it out for yourself.

Glitches (on my Windows-PC running the latest Java version) that I have encountered include:
Moving edges can also be a bit tricky. You need to first select the edges, when the selected edge bundle will be highlighted by a broad yellow aura, and then move the pointer to one of the nodes, until the node is surrounded by an even broader aura. Then click and keep the mouse button down.

To get rid of node shapes, I had to click several times on "none" (first it changes to circles, which then become smaller until being nearly invisible).

Important note: While I had no problem in opening any of my SplitsTree4-generated and saved files, when saving a file in SplitsTree5, SplitsTree4 gives an import failure error message.