As a blogger, one is free to indulge in complexity in all data, although this is not necessarily a good idea in professional publications. We can thus think about the art of networks — that is, inferring networks with an artistic touch (eg. this post on artistic network depictions; and trees can be art, too). For this Christmas post, we will just take the shape of famous Christmas-themed clip art to muse about the evolutionary process that could produce a similar structure.

Despite climate warming, snowflakes are still the basic component of most Christmas-themed art. Phylogentically, they are just unrooted trees, no matter how complex they look, with the difference that the radiation events are trichotomous, not dichotomous, and hence represent rapid radiations (leading to soft polytomies in the inferred tree). 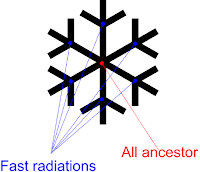 In Germany, a proper Christmas tree has to be a Nordmanntanne — Nord = north, Mann = man, Tanne = fir; Abies nordmanniana (since we planted all our Christmas trees in the garden, we rarely had one). This, in contrast with what you may be thinking, does not come from the north but from the south (and named after a noble Swedo-Finnish zoologist: Alexander von Nordmann), specifically, the mountains along the southern Black Sea coast. Firs are perfect trees for Christmas because they have broad bases and taper towards the tips (try to decorate a Tränenkiefer, Pinus wallichiana, which we once had as an alternative Christmas tree).

Phylogenetically, they are quite specific metaphors, as explained in the diagram.

With only one survivor, we won't have any molecular data reconstructing a fir-like phylogeny. However, we can observe appropriate phenomena in the fossil record: when lineages emerge they usually are not represented by a single form but in several, then there are phases of stasis, then their diversity explodes in a very short time, with subsequent loss until the next radiation event, although the lineage itself is on decline.

We can also turn the Christmas tree upside down, and fill it with two sister lineages, as shown here. 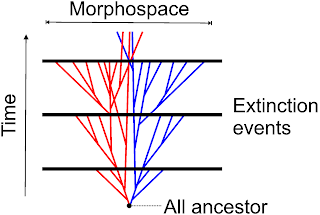 We then end up with a scenario not unlikely in nature. Note that due to the last extinction event the survivors cuddle in the original niche, and only genetics may give us a clue that the similar morphology is not reflecting a recent common origin or the actual phylogenetic relationships.

Despite being a geologist-palaeontologist, I early got into contact with (and was intrigued by) population genetics, due to various circumstances (mainly because I'd make a very poor taxonomist). Hence, I love cactus-like evolutionary metaphors (see here for a real-world example). In the next diagram there is one showing several common evolutionary processes, with the colors representing haplotypic or genotypic variation within the species/species complex represented by the bubbles. 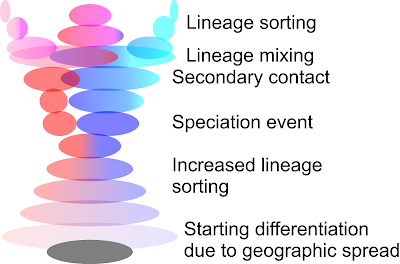 This includes everything I fancy about working at the coalface of evolution: a lot of stochasticity, a bit of reticulation, spiced with potentially misleading signals in the molecular data. A truly angelic evolutionary scenario. 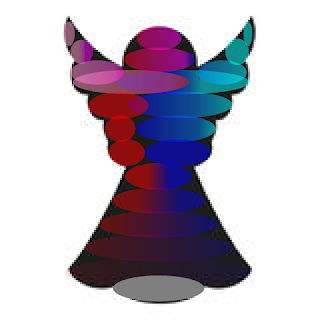 Frohe Weihnachten, Glad jul, Bonne noël, and a Merry Christmas to everyone (or whatever you celebrate and enjoy at the end of the year).

And in case you are looking for a New Year's resolution: next time you write a phylogeny paper, sneak in a phylogenetic (or data-display) network in addition to the always simplifying, and per se trivial, tree.

More on Christmas (and networks)