A proper network of Europeans


Back in May this year, Iosif Lazaridis submitted a paper to the arXiv, called: "The evolutionary history of human populations in Europe". It is now online as part of the December 2018 issue of Current Opinion in Genetics & Development (53: 21-27).

Its interest for readers of this blog is the one and only figure that the paper contains. It is a genealogical network, showing the obvious — that the human "family tree" has quite a few reticulations, mostly due to introgression (or admixture, as human geneticists like to call it). Here is the figure, along with the legend. Note that not all of the edges in the network have a direction, so that it is not really a directed acyclic graph (see also First-degree relationships and partly directed networks). 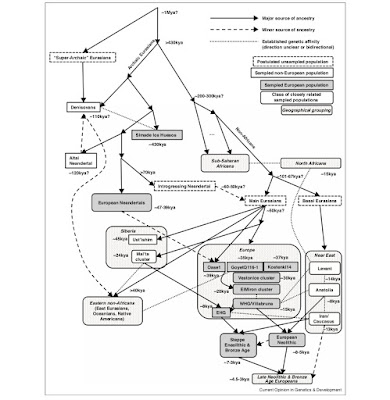 A sketch of European evolutionary history based on ancient DNA
Bronze Age Europeans (~4.5-3kya) were a mixture of mainly two proximate sources of ancestry: (i) the Neolithic farmers of ~8-5kya who were themselves variable mixtures of farmers from Anatolia and hunter-gatherers of mainland Europe (WHG), and (ii) Bronze Age steppe migrants of ~5kya who were themselves a mixture of hunter-gatherers of eastern Europe (EHG) and southern populations from the Near East. Thus, we only have to go ~8 thousand years backwards in time to find at least four sources of ancestry for Europeans. But, each of these sources was also admixed: European hunter-gatherers received genetic input from Siberia and ultimately also from archaic Eurasians, and Near Eastern populations interacted in unknown ways with Europe and Siberia and also had ancestry from ‘Basal Eurasians’, a sister group of the main lineage of all other non-African populations. Dates correspond to sampled populations; in the case of a cluster of populations (such as the WHG), they correspond to the earliest attestation of the group.