A network of World happiness


This is a joint post by Guido Grimm and David Morrison.

To quote the Report:

The rankings use data that come from the Gallup World Poll (GWP). The rankings are based on answers to the main life evaluation question asked in the poll. This is called the Cantril ladder: it asks respondents to think of a ladder, with the best possible life for them being a 10, and the worst possible life being a 0. They are then asked to rate their own current lives on that 0 to 10 scale. The rankings are from nationally representative samples, for the years 2015-2017.

The Report is very comprehensive in its discussion of methodology, and its limitations. It is also very ambitious in its conclusions. The main focus of the 2018 Report is comparing the happiness of immigrants with their local counterparts. Interestingly, they found no important differences between these two groups.

More importantly for this blog, the raw data are provided in an Appendix, so that anyone can look at what is going on. We have decided to do just that.

Below is the first little bit of Figure 2.2 (extracted from the report), which "shows the average ladder score (the average answer to the Cantril ladder question, asking people to evaluate the quality of their current lives on a scale of 0 to 10) for each country, averaged over the years 2015-2017." As you can see, the people who claim that they are happiest are those in the Nordic countries (Finland plus the Scandinavian countries: Norway, Denmark, Iceland and Sweden). These are the people whom the world's cultural cliché sees as sitting for half the year in the gloom! Apparently, you have all got it wrong.

As we have noted before, an index can often do a poor job of summarizing data, because it reduces complex data down to just one dimension. The Happiness Report tries to alleviate this limitation by adding information about some of the other variables that correlate with the Happiness score, using colors:


Each of these bars is divided into seven segments, showing our research efforts to find possible sources for the ladder levels. The first six sub-bars show how much each of the six key variables is calculated to contribute to that country’s ladder score, relative to that in a hypothetical country called Dystopia, so named because it has values equal to the world’s lowest national averages for 2015-2017 for each of the six key variables

[Technical details of our analysis: Qatar was deleted because it has too many missing values; each data variable was then standardized to zero mean and unit variance; the gower similarity was calculated, which ignores missing values, and this was converted to a distance; the distances were then displayed as a neighbor-net splits graph.]

The resulting network is shown next. Each point represents a country, with the name codes following the ISO-3166-1 standard. The spatial relationship of the points contains the summary information — points near each other in the network are similar to each other based on the data variables, and the further apart they are then the less similar they are. The points are color-coded based on major geographic regions (asterisks highlight single states that don't group with the rest of their geographical region). We have added some annotations for the major network groups, indicating which geographical regions are included — these groups are the major happiness groupings. 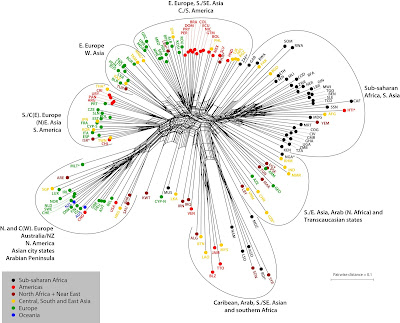 In this blog post we do not want to risk over-interpreting the data, as explained in the final paragraphs below. However, it is obvious that there are distinct patterns in the network. Happiness, and its correlates are not randomly distributed on this planet but, not unexpectedly, relate to the local socio-political situation.

Starting at the bottom-left, we have a geographically heterogeneous cluster of very well-off countries, either welfare states (as in northern Europe), capitalist democracies (eg. the USA, Singapore, Hong Kong), or oil-rich monarchies with high levels of public spending (as in the Middle East). Moving clockwise, the next cluster has much of the rest of the western and central European countries, along with the financially well-off parts of South America and Asia. The next cluster has many of the remaining eastern European countries, plus the nearest parts of Asia, where government spending on welfare is still apparent. Clearly, national wealth plays a large part in happiness, in spite of the well-known adage to the contrary.

This is followed, at the top-middle of the network, by a broad neighborhood (not a distinct cluster), where government spending on welfare is much less apparent, at least to an outsider. The countries here come from Europe, Asia, and Central plus South America (including, at the moment, Greece). Happiness and its correlates is reported to be much lower here.

On the opposite side of the network, happiness is also apparently lower, but with a different set of correlations among the variables. There is a two-part cluster of geographically heterogeneous countries at the bottom-middle, plus a neighborhood at the bottom-right. The latter includes China and India, the two most populous countries (with one-third of our people), while Indonesia (4th) and Brazil (6th) are in the neighborhood at the top of the network.

Finally, the cluster at the right consists mostly of African countries, plus Pakistan (the 5th most-populous country). In this cluster, happiness is reported to be at its lowest observed level. Much of the world's monetary aid is spent in Africa, of course, to try to improve the situation, although there is clearly a long way to go. Not unexpectedly, most of the world's migrants come from the right-hand part of the network, which is one of the main focuses of the Happiness Report.

It is interesting to note that the Bhutan (code BTN) government reportedly aims to increase the Gross National Happiness rather than the GDP (see Gross national happiness in Bhutan: the big idea from a tiny state that could change the world). The network shows that their 2015-2017 happiness is quite different to that of their geographical neighbors. However, it also suggests that they still have a long way to go.

We should finish the discussion with a general point about surveys, such as the Gallup Poll on which the Happiness Report is based. Respondents are not always completely honest when answering survey questions, which is why pre-election polls sometimes get it wrong — people are most serious when faced with an actual decision, rather than a question. All of the results here need to be interpreted in this light — they may not be far wrong, but they are unlikely to be completely right.

Apart from anything else, there can be cultural differences in the way in which the answers to the Gallup World Poll questions are treated. Does "happiness" really mean the same thing across all cultures? We know that "beauty" does not, and "freedom" does not; so why not "happiness"? After all, things like reported happiness are likely to be confounded with other feelings such as national pride. This issue could presumably be addressed by looking at other answers from the Gallup Poll.