Once you have seen a phylogenetic tree, it is difficult not to see them everywhere.

As a first example, this figure is from Alexander J. Hetherington, Christopher M. Berry, and Liam Dolan (2016) Networks of highly branched stigmarian rootlets developed on the first giant trees. Proceedings of the National Academy of Sciences of the USA 113: 6695-6700.

The authors refer to this forest of trees as a "network", but they also note that "stigmarian rootlets branch in a strictly dichotomous manner through multiple orders of branching", and so there are no reticulations.

This next example is taken from the web, from somewhere in Reddit, I believe. The author refers to it as "Geological Phylogenetics". 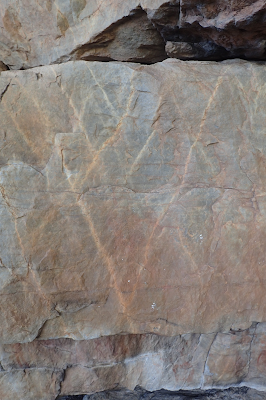 Thanks to Luay Nakhleh for drawing my attention to the first example.