The phylogeny of elves and other fantastic figures


I have previously pointed out that phylogeny reconstructions exits for legendary figures, cartoon animals, Donald Duck, Pokémon, and dragons (see Faux phylogenies). Another popular topic has been the figures of fantastical literature such as elves, dwarves, goblins, gnomes and trolls. Here I present a few of the better-known ones from around the web.

The first one comes from Dominic Evangelista's blog post at The Eco Tome called Phylogeny of elves finds that santa’s workers are actually dwarves. The original data matrix is provided, but the comments on that post point out a few errors in the character coding. 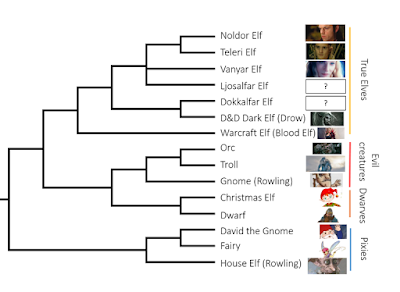 This next one comes from Limey Boy's blog, and specifically pertains to the D&D Elven Phylogenetic Genealogical Tree.

There is a related post on the D&D Human Phylogenetic Genealogical Tree, with a much more extensive genealogy.

Next we have a small tree from Terry Newman covering The Natural History of Fairyland. 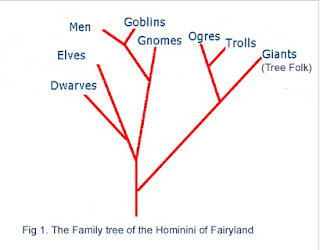 Then we have a somewhat bigger tree from Reddit covering the Evolutionary Phylogeny of Fantasy Races. This seems to have multiple roots, unlike the other genealogies above. 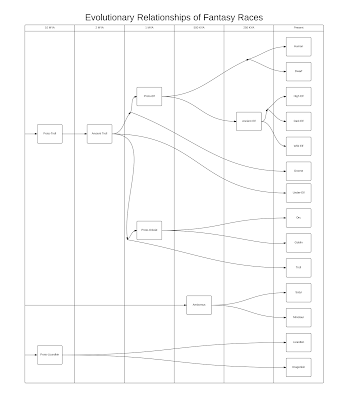 Lord of the Rings

Finally, we have the genealogy to end all fantasy genealogies. The Lord of the Rings Project has a complete interactive genealogy of all of the works of J.R.R. Tolkien. It is way too large to show here, even in miniature, and is actually a series of genealogies that are not connected. However, it is worth noting that, unlike the above genealogies, while most of the genealogies are tree-like many are actually networks because both sexes are included.