A network analysis of pizza styles


Over the past century a number of food styles have become internationalized, including hamburgers and fried chicken. Not all of these foodstuffs are nutritious, and some people have noted that not all of them are even particularly edible. However, perhaps the most interesting of these foods is the venerable pizza, not least because the customer has considerable say in what it looks and tastes like, but also because it is made and cooked fresh, right in front of us. 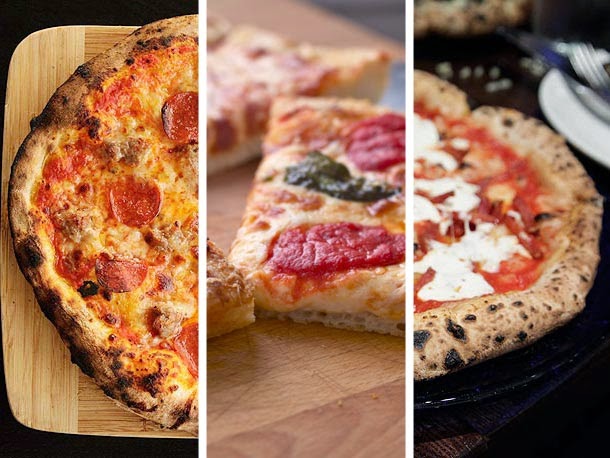 Pizza originated in Italy, Greece, or Persia, depending on how we define pizza. After all, covering flat bread with a topping is an idea that goes back a very long way. In the ancient world, the Egyptians made flat bread; the Indians baked bread in an oven, but without a topping; and the Persians cooked their bread without an oven, but they did put melted cheese on it. The Passion 4 Pizza site notes this more recent history: "The ancient Greeks had a flat bread called plakountos, on which they placed various toppings [eg. herbs, onion and garlic], and we know also that Naples was founded (as Neopolis) by the Greeks; and Naples is the home of the modern pizza."

In 16th century Naples, a yeast-based flat bread was referred to as a pizza, eaten by poor people as a street food; but the idea that led to modern pizza was the use of tomato as a topping. Tomatoes were introduced to Europe from South America in the 16th century, and by the 18th century it was common for the poor of the area around Naples to add tomato to their bread. Pizza was brought to the United States by the Italian immigrants in the late 19th century, and became popular in places like New York and Chicago.

Kenji López-Alt publishes The Pizza Lab, which is part of the Serious Eats blog, and he has taken a serious interest in pizza styles, at least in New York. He recognizes three main styles of pizza, based on their dough, the way it is treated, and the temperature at which it is cooked (see the picture above, left to right):
He also has several variants on these styles.

As a basis for discussion, I have analyzed the dough ingredients of these three styles, using a phylogenetic network as a tool for exploratory data analysis. To create the network, I first calculated the similarity of the pizzas using the Manhattan distance, and a Neighbor-net analysis was then used to display the between-dough similarities as a phylogenetic network. So, pizza-dough styles that are closely connected in the network are similar to each other based on their ingredients, and those that are further apart are progressively more different from each other.

The Neapolitan-style dough is the simplest in terms of ingredients. The dough is not kneaded, but instead is allowed to rise for 3-5 days in the refrigerator, although it remains a thin-crust pizza. It is cooked quickly at a high temperature. The New York-style dough is an offshoot of this that is slightly thicker, and is cooked cooler and slower. The unkneaded dough stands in the fridge for only 1 day. Like all of the styles except the Neapolitan, olive oil is used in the dough, but unlike any of the others it also contains sugar (to help the crust brown more evenly). The Sicilian-style dough is intended for a thick-crust pizza. It requires only a little kneading, after which it is allowed to rise for 2 hours at room temperature. It is essentially fried in olive oil while baking.

The Greek-style pizza is allegedly a style "found mostly in the 'Pizza Houses' and 'Houses of Pizza' in New England". As shown by the reticulation in the network, it has characteristics of the Neapolitan pizza dough (relatively low water content) and the Sicilian (relatively high oil content). It is left to rise at room temperature overnight, and is cooked like the New York and Deep Pan pizzas.

There are many other pizza styles, of course, but I do not have recipes for them. For example, there is another Deep Dish style found in Chicago.