Some time ago I published a blog post on Faux phylogenies in which I included a phylogeny of cartoon animals by Mike Keesey. In this phylogeny, SpongeBob SquarePants was the outgroup. However, SpongeBob goes much further than this.

Importantly, the main characters in the cartoon have representative members of several phyla (notably, except the Cnidaria). Indeed, the List of SpongeBob SquarePants characters at Wikipedia makes this very clear. This opens up the possibility that they could be a means of using modern culture to introduce phylogenetics. This idea has been independently discovered at least twice.

Perhaps the best known usage is by Paul Arriola, produced for his freshman biology students, as shown in the first figure. 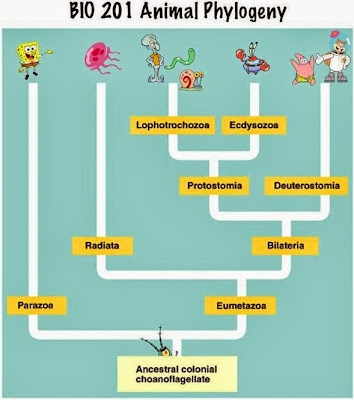 Another, apparently independent, usage is by Rita Chen of the sister artists known as The Hurricanes. 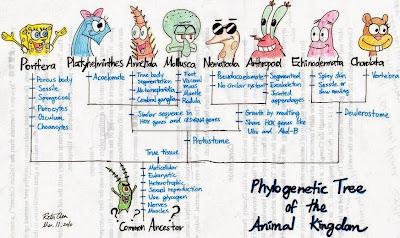 Note that a few "extra" characters have been added (the planarian, ragworm and roundworm), and that the names are not all quite correct.

By the way, did you know that there is a species of sponge-like fungus (in the Boletaceae) called Spongiforma squarepantsii, and named after the character? If not, then see Wikipedia.