Since most systematists do not know it, I thought that I should mention that there is actually a suggested World Heritage initiative called "The Rise of Systematic Biology". I mention this now because there is currently a public display about it here in Uppsala (Sweden).

Technically, this is what the UNESCO World Heritage Centre calls a "tentative proposal". It is being co-ordinated by the Uppsala County Administrative Board [Länsstyrelsen i Uppsala län] but involves a cultural landscape nomination of 12 sites in 8 countries. The "tentative" nature of the proposal reflects the fact that the four Swedish landscapes were agreed by the Swedish National Heritage Board [Riksantikvarieämbetet] back on 15 June 2009, and they submitted their part of the proposal to UNESCO on 2 December 2009. However, the proposal will not be complete until the other countries have formally agreed to nominate their sites.

Talks are currently underway with the relevant authorities in the proposed partner countries. The final nomination will be submitted to UNESCO by the Swedish government at the earliest in February 2015. In that case, a UNESCO decision should be made by the middle of 2016. 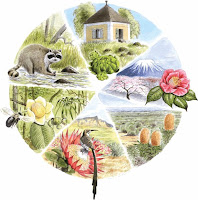 The proposal centres around Carl von Linné and his students. In Sweden, the cultural landscapes include his birthplace (Råshult), his Uppsala University garden (Linnéträdgården) and house (Linnémuseet), his personal home (Hammarby), and some of the areas around Uppsala where he conducted his botanical excursions (Herbationes Upsalienses). Elsewhere, they include places associated with his studies (Hortus Botanicus, Leiden, in the Netherlands), and the travels of his students (in Australia, France, Japan, South Africa, United Kingdom, United States of America).

The current status of the proposal can be viewed at the UNESCO World Heritage Centre site, and a PDF English-language summary of the proposal (listing the other cultural sites) is available from the Uppsala County Administrative Board site.


PS. After my recent visit to Råshult, I have now visited all of the suggested sites in Sweden, Australia and the Netherlands.