Destroying the Tree of Life?


In my previous blog post (Resistance to network thinking) I noted that a phylogenetic network is a generalization of a phylogenetic tree because "a network simplifies to a tree if there are no incompatible phylogenetic signals". Given this, to me it has often seemed somewhat odd that so many of the people who are interested in generalizing the Tree of Life into a Network of Life use metaphors suggesting that the tree first needs to be destroyed.

This approach was popularized by Ford Doolittle, who entitled his 2000 Scientific American [282(2): 90–95] article "Uprooting the Tree of Life", although this particular metaphor had previously been used by, for example, Elizabeth Pennisi [Science 284: 1305-1307].

This approach reached its apogee with the ridiculous cover of New Scientist in January 2009. The cover accompanied an article by Graham Lawton now mildly entitled: "Why Darwin was wrong about the Tree of Life" [201(2692): 34-39], although the editor (Roger Highfield) originally called it "Axing Darwin's tree". 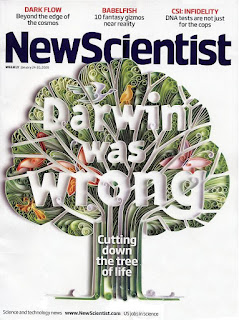 As was noted at the time, this cover was "a misdirected and entirely inappropriate piece of sensationalism", which did no one any good (least of all the editor). A subsequent Letter to the Editor [by Dennett, Coyne, Dawkins and Myers] noted: "Nothing in the article showed that the concept of the Tree of Life is unsound; only that it is more complicated than was realised before the advent of molecular genetics."

So, it seems likely that the tree needs to be neither axed nor uprooted, nor "trashed" [Laura Franklin-Hall], nor even "politely buried" [Michael Rose]. In many cases all that is is needed is some osculations between the branches. Indeed, most of the scientific discussion is about how many osculations there are, and how we can best detect where they are, rather than about destroying the tree itself. A network is more general than a tree, rather than being a fundamentally different structure. Nevertheless, some people, such as Michael Syvanen, have been quoted as saying: "We've just annihilated the Tree of Life", when referring to their new network.