Following on from my earlier post about the network genealogy of dogs by Georges-Louis Leclerc, comte de Buffon (1707-1788), it seems appropriate to mention some other notable aspects of his treatment of the dog genealogy.

Buffon is usually considered to have been a remarkable man, whose influence on modern evolutionary science has been profound: "Except for Aristotle and Darwin, there has been no other student of organisms who has had as far-reaching an influence" (Ernst Mayr. 1982. The Growth of Biological Thought: Diversity, Evolution, and Inheritance). He was greatly influenced by Isaac Newton, who sought to describe the workings of nature as being under the control of natural forces. Buffon successfully applied this idea to biology and geology, so that "after Buffon it became impossible for naturalists to refer uncritically to non-natural explanations for natural phenomena" (Keith R. Benson. 2004. Encyclopedia of the Early Modern World). 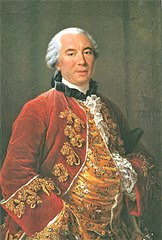 Buffon's multi-volume Histoire naturelle générale et particulière was intended to describe all of nature rather than merely to catalogue it, as was being done so successfully by his contemporary Carl von Linné (1707-1778). He started with geology in the first few volumes of the Histoire, and then proceeded on to domesticated animals. The coverage of dogs was preceded in the same volume (V) by sheep, goats and pigs; with horses, asses, cows and bulls being in the previous volume (IV), and cats in the subsequent volume (VI).

Dogs were domesticated from the Gray Wolf at least 10,000 years ago, and dogs similar to some modern breeds appeared at least 4,000 years ago. Genetic analyses indicate that most modern breeds have arisen probably <200 years ago (and almost certainly <400). So, Buffon had less material to work with (and explain) than we do, especially given his lack of knowledge about the numerous types of "village dogs" in Africa and Asia.

Moreover, Buffon nominated what may be called "progenitor breeds" for each class, with the remaining breeds within each class being derived from that progenitor. This matches our current understanding of domestication, with ~10 progenitor breeds being originally developed to fulfill different roles required by humans (e.g. herding, retrieving, hunting), and then today's pure breeds being derived from those progenitors during the subsequent few millenia. So, our current understanding of the origin of dog genetic variation is essentially the same as that adopted by Buffon. He was, in this sense, an influential pioneer.

Buffon's use of a network to visualize his ideas on genealogy seems to be entirely original. Interestingly, his use of solid lines in the network to represent the underlying tree of vertical descent (parent to offspring) and dashed lines to represent the horizontal genealogy of cross-breeding (hybridization) is the precursor to much modern practice. Most of the contemporaneous networks, which represented similarity relationships rather than historical ones, treated all linkages as equal.

Buffon did, by modern reckoning, get the details of the network root wrong. He nominated the "Shepherd Dog" as the root, and also as being part of a group with the Icelandic Sheepdog, Lapland Dog and Siberian Husky. We do not now include sheepdogs in that group, but these other dogs are today considered to be part of the sister group to all other modern breeds. So, Buffon's idea was along the right track.

Furthermore, Buffon expected the wolf to be the natural ancestor of modern dogs, which accords with modern genetic data showing wolves to be the sister group to all dogs. However, Buffon, failed in his experimental attempts to cross-breed dogs and wolves (he would never have gotten his described experiments past an ethics committee!), and also dogs with foxes. So, he concluded that the "dog derives not his origins from the wolf or fox." Nevertheless, he still maintained that "Each one of these species is truly so close to the others" and the "individuals resemble each other so much . . . that one has difficulty conceiving why these animals cannot reproduce together." This persistence was soon vindicated, when a "Mr Brook, animal-merchant of Holborn" did succeed in cross-breeding a female dog and a male wolf [as reported in William Smellie's English translation of Buffon's work].

Buffon did, however, have one major stumbling block. He believed in the fixity of species, and so the diversity of modern domestic breeds required careful thought on his part. He had no problem with the idea that a mule is the sterile offspring of a donkey and a horse, but the fertile inter-breeding of a wide morphological variety of domestic dog breeds put a great strain on the idea of fixed species. He thus settled on a theory of transmutation of domesticated animals in response to environmental effects. For example, when one dog breed is transported to a different climate it changes into a different type of dog. [It's unclear if he thought that the actual animal changed, or if it's offspring were born in this new form.] This idea was taken up by Buffon's intellectual successor Jean-Baptiste Pierre Antoine de Monet, Chevalier de Lamarck (1744-1829), who applied a much broader version of the same idea to natural species as well as to domesticated ones.

It is worth noting that Buffon's transmutation idea was not actually crazy. He was simply being a consistent Newtonian by attributing a common cause to diverse phenomena. Since it was known that different geographical areas have different floral and faunal assemblages, Buffon attributed to the same environmental factors variation due to both geography and domestication. Indeed, by relating biodiversity to environment Buffon has actually been seen as the father of modern biogeography (Mayr 1982).

So, it seems top me that Buffon did remarkably well when presenting his ideas about the dog genealogy. He pioneered some things, got others basically right but missed in the details, and really got only one idea fundamentally wrong. His idea of a transformable "moule intérieur" was the best he could come up with in the absence of any idea about genetics, but surely he would have understood modern genetics very well if he had lived to see it.