Phylogenetic networks were developed as a professional tool for displaying complicated evolutionary histories. However, this does no mean that such networks cannot be used elsewhere.

As an example, Pete Buchholz produces drawings of dinosaurs as the artist Ornithischophilia at the DeviantArt web site. Among these drawings are some phylogenies, and two of them are networks.

The first one is labelled Citrus is complicated, and refers to the origin of citrus cultivars. 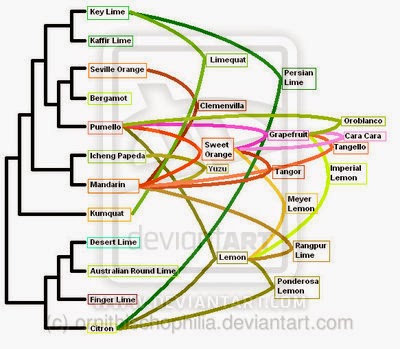 The phylogenetic tree at the left is sourced from the American Journal of Botany, while the network at the right is from information in Wikipedia. The combination of the two appears to be original to the artist. The network is read from left to right — for example, the Limequat is a hybrid of the Key Line and the Kumquat. Compared to the original Wikipedia text, the picture speaks a thousand words.

The second network is labelled Apples are complicated, and refers to the origin of some of the apple cultivars. 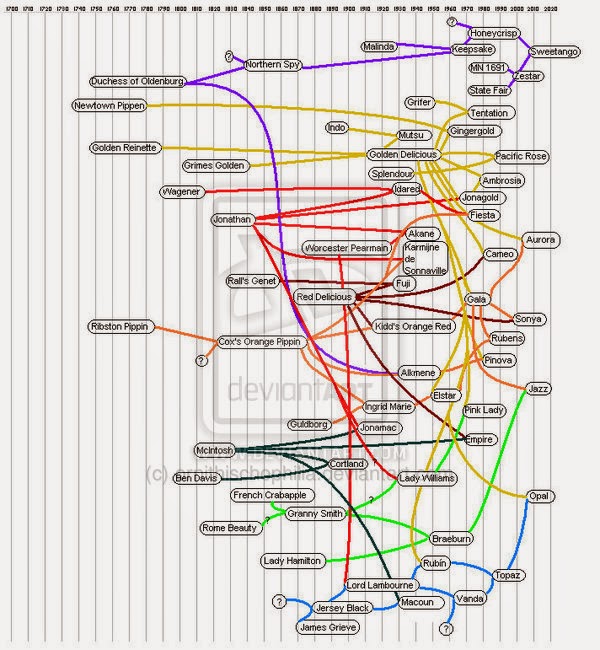 No source is given for the information, but I assume that it also comes from Wikipedia. Note that, as before, the network is read from left to right, but this time there is a time scale at the top. The artist refers to it as a "spaghetti diagram", and notes that:


Colors are based on the major parent that the "story" revolves around; purple for Honeycrisp, Yellow for Golden Delicious, Red for Jonathan, Maroon for Red Delicious, Orange for Cox's Orange Pippin, Teal for McIntosh, Green for Granny Smith, and Blue for Topaz.