This week we have returned to Leiden (in the Netherlands), for another workshop sponsored by the Lorentz Center. The previous workshop, in October 2012, is discussed in this prior blog post: Workshop: The Future of Phylogenetic Networks. 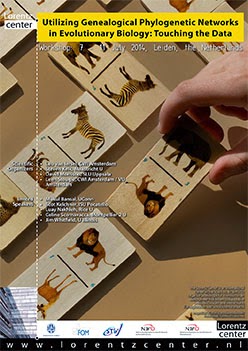 The full title of the new workshop is: Utilizing Genealogical Phylogenetic Networks in Evolutionary Biology: Touching the Data. As before, it has been organized by Steven Kelk, Leo van Iersel, Leen Stoogie and myself. The program and abstracts can be found here. It runs for the whole week 7 July – 11 July 2014.

The workshop differs significantly from the previous workshop in two ways: it is intended to be a much smaller and more focused workshop, and it is intended to be practical rather than theoretical. The basic aim is to get biologists and computational people to sit down in small groups and actually talk about real phylogenetic data, so that each side of the phylogenetics "coin" gets to understand a bit better what is going on on the other side. To this end, we have gathered together some of the experts in the field specifically of evolutionary / genealogical networks (rather than data-display networks), as this is the area that needs the greatest future development. We have also gathered together some real-world datasets involving apparent reticulating evolution, which will be the focus of discussion. These datasets are available here and also here.

The weather is predicted to be changeable during the workshop, which is to be expected in northern Europe even in summer — that is why everyone else has gone to southern Europe.

I am hoping to add some blog posts based on what happens at the workshop, as it proceeds.