Pierre Trémaux is a name that most of you will not have heard of, and yet he was a remarkable man. Or, rather, he wrote one remarkable book that has been almost completely ignored by history. 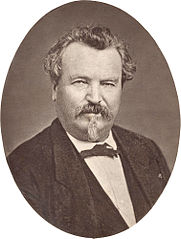 Trémaux (1818-1895) has been described as "a French architect, orientalist and photographer", but in his late 40s he also became a theoretical biologist, and it is this latter context that is of interest here. His best-known book is Origin et Transformations de l'Homme et des Autres Êtres (1865, L. Hachette, Paris). The ambitious nature of this book is indicated by its subtitle: Indiquant la transformation des êtres organisés, la formation des espèces, les conditions qui produisent les types, l'instinct et les facultés intellectuelles, la base des sciences naturelles, historiques, politiques, etc. [Indicating the transformation of organized beings; the formation of species; the conditions that produce the types, the instinct and the intellectual faculties; the base of natural sciences, history, politics, etc.]

In this book the author did four noteworthy and original things regarding phylogenetics:

Points (1) and (2) are illustrated in the only diagram in Trémaux's book, as reproduced here.


The text translates as:

Origin and Transformations of Beings
Synoptic figure of the transformation of species, by P. Trémaux

Species of different branches of the animal kingdom, arising from the same origin (the primordial cell or utricle), subdivide age by age; some of the species become extinct in every age, the others continue to grow and to divide and diverge more and more in their characters.

As far as point (1) is concerned, it is important to note that Darwin's 'tree' diagram is not connected to his description of the Tree of Life. The diagram is used to describe his vision of divergence, and descent with modification; at no stage does he refer to it as a "tree". His dry-as-dust description of the diagram and his poetic evocation of the biblical Tree thus have nothing to do with each other. It is merely a modern fancy to suggest that Darwin drew what we would now call a phylogenetic tree.

Darwin's diagram is not even connected at the base, as must be a genealogical tree. This presumably reflects his idea, as he put it in Notebook C in 1838: "The bottom of the tree of life is utterly rotten & obliterated in the course of [the] ages." His predecessors also had doubts about the base of the tree (notably Louis Agassiz and Edward Hitchcock), so that when they drew their diagrams of the fossil history of organisms they also were not connected to a single origin. Trémaux had no such doubts, and explicitly indicated a single origin and connected all of his lineages to it.

Ironically, Trémaux actually produced (quite independently) a finished version of an idea that Darwin sketched in one of his notebooks. This is on a page numbered 184 (probably from the early 1850s; see Charles Darwin's unpublished tree sketches). As shown below, it also considers the relationship between genealogical trees and geological history. Darwin owned a copy of Trémaux's book but apparently saw nothing of worth in it (Wilkins & Nelson 2008), in spite of the obvious relationship to his own idea!


Circular trees apparently did not re-appear until the work of Engler (1881), where the concentric circles represented different morphological features, instead of geological time, thus showing phenotypic divergence from the common ancestor (along with the genealogy represented by the tree itself).

It is of some concern that Trémaux's book is so poorly known and the author himself almost unheard of. He does not appear in any of the standard histories of biology (see Wilkins & Nelson 2008), and his entry in the English-language Wikipedia has only two lines (he fares better in the French version)

In his 1874 book (Origine des Espèces et de l'Homme, avec les Causes de Fixité et de Transformation, et Principe Universel du Mouvement et de la Vie ou Loi des Transmissions de Force) Trémaux makes it clear that the [French] Académie des Sciences had rejected his work. Thereafter, few people seem to have read any of it, relying instead on the correspondence of Karl Marx (who thought the book was great) and Friedrich Engels (who though that it was rubbish) to pass judgement. Wilkins & Nelson (2008) have tried to redress the problem to some extent.

The rejection by the Académie is likely to have been because they did not accept the application of Darwinian evolution to humans. Indeed, it has been noted (see Hull 1988) that French biologists did not embrace Darwin's ideas in general. More particularly, Darwin himself realized that most of the problems engendered by his work would surround the idea of human evolution. Indeed, it was one major area where he and Alfred Russel Wallace (who independently developed the idea of natural selection) disagreed, as Wallace refused to apply the idea to humans.

Wilkins & Nelson (2008) wisely suggest that much of the confusion also comes from translating Trémaux's use of the French word "sol" as "soil" rather than as "habitat", thus leading to the conclusion that Trémaux was claiming that it is the nature of the soil alone that affects evolution. This was certainly done by Stephen Jay Gould (1997, 1999), who commented that: "I have never read a more absurd or more poorly documented thesis." Trémaux and his book deserve a better epitaph than that, because Trémaux certainly meant much more than most of the historical commentators have credited him with.

Hull D.L. (1988) Science as a Process: An Evolutionary Account of the Social and Conceptual Development of Science. University of Chicago Press, Chicago.

Wilkins J.S, Nelson G.J. (2008) Trémaux on species: A theory of allopatric speciation (and punctuated equilibrium) before Wagner. History and Philosophy of the Life Sciences 30: 179-206.