Highlighting splits in a splits graph


A splits graph is interpreted in terms of splits, or bipartitions, which divide the graph into two non-overlapping parts. If one wishes to refer to particular splits in a graph then one needs a way of highlighting those splits.

This can be done in a number of ways, some of them derived from conventions originating for the presentation of rooted phylogenetic trees. These include highlighting the taxa in one of the partitions, which is analogous to highlighting a clade in a rooted phylogenetic tree. Alternatively, we could colour the edges associated with each of the two partitions, as shown in this previous blog post (How to interpret splits graphs); however, this works only for a single split at a time.

Alternatively, it is also possible to label the edges of the splits themselves, as shown in this previous blog post (Representing evolutionary scenarios using splits graphs). Dabert et al. (Dabert M, Witalinski W, Kazmierski A, Olszanowski Z, Dabert J (2010) Molecular phylogeny of acariform mites (Acari, Arachnida): strong conflict between phylogenetic signal and long-branch attraction artifacts. Molecular Phylogenetics and Evolution 56: 222-241) present another possibility, which is to colour only the edges that separate to two partitions of each split, as shown in the figure. 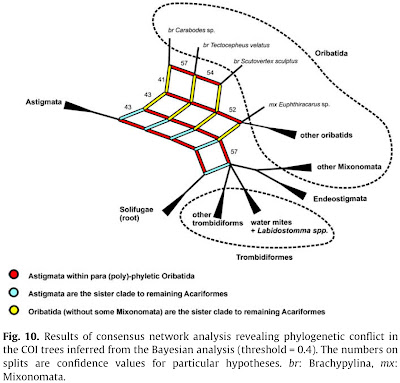 This works very well visually. However, there is still the matter of actually labelling the coloured edges. Unfortunately, Dabert et al. chose to do this using terminology that is more appropriate for a rooted phylogenetic tree than an unrooted data-display network. That is, they refer to "clades", which can be recognized only in a rooted graph. Their diagram is clearly labelled with a root taxon, even though the graph itself is unrooted. The implication here is that interpreting the unrooted graph as a rooted network is straightforward, but it is not. It would be better to use the standard terminology, which refers to "splits" or "partitions", rather than to "clades".