In previous posts I have illustrated several of the evocative metaphors that have been used to describe reticulating evolutionary relationships. Today, I thought that I might produce a list of the ones that I know about. I have included the first source that I am aware of, along with a picture. Metaphors are a special case of analogies (together with similes) and we should, of course, be wary of taking them literally.

Roland B. Dixon (1928) The Building of Cultures. Charles Scribner's Sons, New York.
(the warp and weft to the tapestry of culture history) "of these two elements the fabric of a people's culture is woven. The foundation or warp comes from within [heritage], the exotic elements or weft, from without [diffusion from other groups]"

Earnest A. Hooton (1931) Up From the Ape. Macmillan, New York.
"the various ways in which human blood streams have intermingled to form the principal races ... a sort of arterial trunk with offshoots and connecting vessels"

Ralph Linton (1955) The Tree of Culture. Alfred A. Knopf, New York.
"the branches of the banyan tree cross and fuse and send down adventitious roots, which turn into supporting trunks" 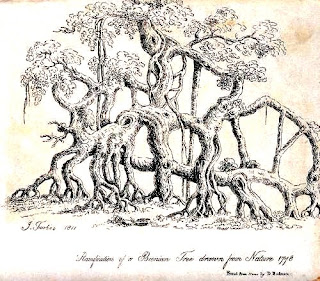 John H. Moore (1994) Putting anthropology back together again: the ethnogenetic critique of cladistic theory. American Anthropologist 96: 925–948.
"the channels of a river separate and recombine in a complex fashion, just as the component populations of the human species separate and recombine" (this contrasts with the "forked river" metaphor for dichotomous evolution)
Update: This metaphor goes back much further; see Rivers of Life, instead of trees.

Gilles Deleuze and Félix Guattari (1976) Rhizome; first published translation by Paul Foss and Paul Patton in 1981. This article appeared in revised form as the Introduction to Mille Plateaux (1980) Les Editions de Minuit, Paris.
"The evolutionary scheme would be made not only based on tree-like models of descent, but along a rhizome, built directly within heterogeneous populations and jumping from one already differentiated line to another one." (a rhizome is an underground stem that sends out roots and shoots that develop into new plants) 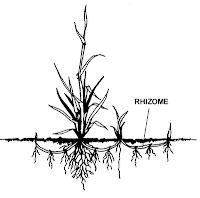 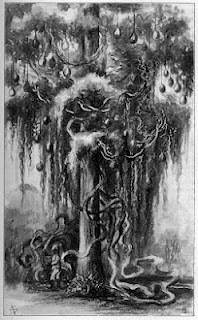 I have used this expression a couple of times, having learned it in my youth, but it has not yet caught on. A plexus is a combination of interlaced parts, and is most commonly used for nerves, blood vessels or lymphatics. The picture shown here is the cervical and brachial nerve plexuses.

This is a tricky one. Donati used the Italian word "rete" (net or network) for biological relationships, but he was not explicitly referring to evolution: "the natural progressions should have to be compared more to a net than to a chain, that net being, so to speak, woven with various threads". Buffon used the French word "arbre" (tree) for his seminal reticulating diagram that clearly referred to genealogy, describing it as "a kind of family tree". Duchesne also used the French expression "arbre généalogique" (family tree) for his later network, while Pax used the German word "verwandtschaftlichen" (family relationship) for his. So, it is not clear who first actually used the word "network" in an explicitly evolutionary context. The first reference to a "phylogenetic net" was probably by Grant, and the first reference to a "phylogenetic network" by Holmquist. 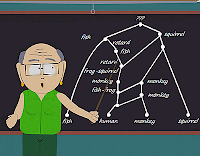 This is just as tricky as "network". The metaphor has a long history but not necessarily in an evolutionary context; and it may be best left as a metaphor for ecosystem relationships. It has recently been revived by evolutionary bacteriologists dealing with horizontal gene transfer.


Note: many other metaphors have been used for biological relationships (such as scale, map, crystal, tangled bank), but these have not been applied to explicitly evolutionary relationships, as far as I know.