The distinction between networks and augmented trees is interesting from a biological, computational and mathematical point of view. An augmented tree is the result of adding cross-connecting branches to a tree, turning it into a network. So each augmented tree is a network (called a tree-based network). But is each network an augmented tree? In a previous blog post we showed that this is not the case. There exist networks that are inherently network-like and cannot be obtained by adding branches to a tree. (If we are allowed to create new nodes by subdividing branches of the tree, but are not allowed to subdivide any of the previously-added branches.)

The biological question here is as follows: is evolution a tree-like process augmented with horizontal events, or is evolutionary inherently network-like?

This concept is also relevant to phylogenetic network reconstruction approaches, because several such methods work by adding edges to an estimated species tree. Therefore, there exist networks that will always be missed by such methods.

Interestingly, it has turned out that it is easy to find out if a given network is tree-based or not. A polynomial-time algorithm was presented recently by Francis and Steel:

They solve the problem by reducing it to a model called 2-SAT, which is interesting because it automatically leads to a very simple and fast algorithm solving the problem.

An interesting question that remains open is the following. Given a network and a tree, can we decide in polynomial time if the network can be obtained by adding edges to the given tree? Another question is whether there exists a clean graph-theoretic characterisation of tree-based networks.

Below you see Mike Steel presenting their recent paper at the Phylogenetic Networks Workshop in Singapore. He also discussed other recent results, concerning folding and unfolding phylogenetic trees and networks, as well as distance-based methods for detecting reticulation. 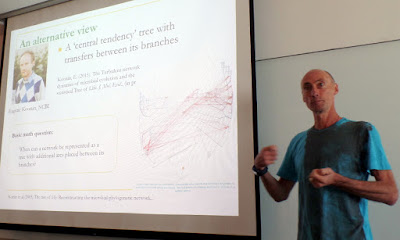