First millennium problem has been solved: tree containment is easy on stable networks

This problem was shown to be NP-hard in this paper in 2008. So, not only is it difficult to reconstruct phylogenetic networks, it is even difficult to check if a given network is consistent with certain gene trees or the estimated species tree.

In this paper in 2010, Charles Semple, Mike Steel and I studied for which classes of networks this problem remains hard and for which ones it becomes easy. In particular, we showed that the problem becomes polynomial-time solvable on so-called binary tree-child networks.

We advertised this open problem as Problem 4 in a list of seven important open computational problems related to phylogenetic networks in this blog post. Recently, there has been quite some interest in the problem, and two papers have presented algorithms for restricted subclasses. A solution for the whole class of binary stable networks has now been proposed in:

The paper has not been published yet, but the proof seems correct to me, and is very clever and elegant. Hence, the first of the seven "phylogenetic network millennium problems" has been solved!

Below you see Louxin Zhang presenting the algorithm at the Phylogenetic Networks workshop in Singapore. 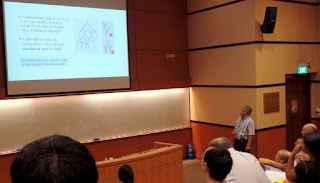