There was more heavy maths today.

Charles Semple started by counting trees within specified types of network. In the process, he provided the first mathematical proof of the week (he actually provided two). He also raised the issue of what, exactly, is a phylogenetic network — we have had many mathematical restrictions placed on networks this week, and it is not always clear how any of them might relate to biological concepts.

Leo van Iersel tried constructing super-networks from incomplete sub-networks, sticking to algorithms rather than proofs. Yufeng Wu and Zhi-Zhong Chen later tried the same strategy for their networks, as did Lusheng Wang for pedigree comparison (he was the only person other than myself to even mention pedigrees).

Mike Steel considered under what circumstances a network can be viewed as a "tree with reticulations" rather than a non-tree network (ie. not every vertex is part of the same underlying tree); this led him to the interesting observation that whether a dataset can be represented by a tree can depend on the taxon sampling. He also looked at when a set of non-tree distances can appear to be tree-like, which is the sort of question that only a mathematician would ask.

Most of the audience interjections this week have come from Sagi Snir, and the rest of the speakers got to return the favor this afternoon, when he spoke about trying to reconstruct trees subject to large amounts of horizontal gene transfer. In the process, he also tried to "sketch" a mathematical proof, which turned into a full-sized painting, before moving on to his algorithm. 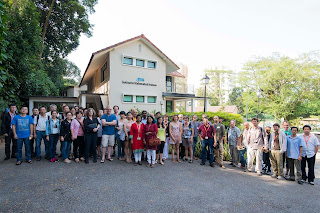 Email ThisBlogThis!Share to TwitterShare to FacebookShare to Pinterest
Labels: Workshop