In a previous blog post (Charles Darwin's family pedigree network), I mentioned several well-known people who were involved in a consanguineous marriage, which is defined as the union of two people who are related as closer than second cousins. In that post I discussed in detail Charles Darwin (who married his first cousin); and in this post I discuss the artist Henri Toulouse-Lautrec, who was the offspring of a marriage between first cousins.

I thought that this would be a simple post, because there must be people who have studied the Toulouse-Lautrec-Montfa genealogy, given Henri's fame as a Post-Impressionist artist, along with the widespread knowledge that his phyiscal disabilities were genetic. But it turned out not to be so — there is no broad family tree that I could find, and no detailed discussion of inbreeding. The main information easily available is the direct lineage of inheritance of the various noble titles to which Henri would have been heir (had he survived his father, the Comte de Toulouse-Lautrec-Montfa), which can be traced back for more than 1000 years (see Vizegrafschaft Lautrec). However, the main interest for biology lies in his genetic relationship with his cousins, as we shall see below.

So, I sat down for a day to compile the family history for myself. The resulting genealogy is incomplete, but all of the relevant people are in it. I could not find all of the details about some of these people, either, which are apparently not available on the web; and some of the actual dates are inconsistent across different sources. In general, I have followed Dupic (2012).

The point of this post is that marriages within a family turn the family tree into a network. So, a pedigree can be tree-like or not. In the latter case it is an example of a hybridization network.

This first genealogy shows a standard family tree for a single individual, looking backward in time from the bottom. So, this person is #1, the parents are #2 (father) and #3 (mother), and so on back through the generations, always with the male parent on the left (as is the convention). This example covers six generations, showing that without inbreeding everyone has 32 great-great-great grand-parents. These 32 people's genes are mixed more-or-less randomly (depending on recombination and assortment) to produce person #1. This is a good thing, evolutionarily, because there is then genetic diversity within #1.

The second genealogy shows what happens when person #7 is the daughter of someone else in the same pedigree. If she is the daughter of #10 and #11, for example, then #5 and #7 would be sisters, and #2 and #3 would be first cousins. Now, person #1 has only 24 great-great-great grand-parents, and some of them are contributing to their descendants twice, rather than once (ie. #40–#47). This means that the genetic diversity in person #1 is less than it would be without the inbreeding. More to the point, any recessive alleles that exist in the ancestry have an increased probability of being homozygous in #1, and thus being expressed in the phenotype.

This is, unfortunately, exactly what happened to Henri Toulouse-Lautrec, whose pedigree network is shown in the next figure. It is complete for six generations, plus an important part of the seventh. It is difficult to be complete beyond this generation, as the information becomes sparse, particularly about the female family members.

As shown, Henri's parents were first cousins, because their mothers were sisters. In addition, his maternal grandfather (#6) also had recent inbreeding in his history, because his mother (#13) was the daughter of a first-cousin marriage. This is not nearly as much inbreeding as has been implied by most commentators about Henri's life, but it is enough to potentially create genetic problems.

Note that it was Henri's mother's side of the family that was involved in the recent inbreeding, but the de Toulouse-Lautrec Montfa side was prone to the same thing, as are most titled families. As noted above, Henri died before inheriting his title. The title Comte de Toulouse-Lautrec-Monfa passed to Alphonse' next brother, Charles (1840-1917), who had no children, and thence to the next brother, Odon (1842-1937), and finally to Odon's son, Robert (1887-1972), who also had no children. The Internet seems to be silent about what happened to it after that.

For Henri, life was tragic because he ended up with two copies of one particular recessive allele. The medical profession has been interested in this ever since his death, and much information is therefore now available about his condition (eg. Albury & Weisz 2013; Leigh 2013).


The condition from which he probably suffered was first described in 1954 by the French physician Robert Weissman-Netter. It was named pycnodysostosis in 1962 by Marateaux and Lamy and was soon attributed to this artist as the "Toulouse-Lautrec Syndrome" ... Pycnodysostosis is a hereditary autosomal recessive dysplasia caused by an enzyme deficiency, namely of cathepsin K (cysteine protease deficiency in osteoclasts), reducing the normal bone resorption and leaving an incomplete matrix decomposition ... Toulouse Lautrec had a short stature with shortened legs, a large head due to a lack of closure of the fontanellae (which he usually covered with a hat), a shortened mandible with an obtuse angle (covered with a thick beard), dental deformities that required several surgical interventions, a large tongue, thick lips, profuse salivation, and a sinus obstruction with post-nasal drip. With fractures of the long bones during childhood, later on of the clavicle, with progressive hearing problems and cranio-facial deformities, Lautrec’s condition would complete the diagnosis of pycnodysostosis.

It seems to be widely recognized that Henri threw himself into his art at least partly to compensate for the psychological damage produced by his physical condition (he also became an alcoholic). As Leigh (2013) notes, his mother's side of the family had money (his father's side had a title but little money), and so Henri was financially free to do what he liked. He worked at a prodigious rate, and produced a life-time's worth of art in just 15 years — perhaps most famously his flamboyant lithograph posters (still as popular today as they were in his own time), but also oil paintings, watercolours, sculptures, ceramics and stained glass. He died at his mother's Château Malromé at age 36, after a stroke, but ultimately probably from tuberculosis (Albury & Weisz 2013).

Further inbreeding in the family

I noted in my previous post about Charles Darwin that, not only did he marry his cousin, his own sister married his wife's brother, thus literally keeping things in the family. In Henri Toulouse-Lautrec's case, the same thing happened: his paternal aunt married his maternal uncle, as shown in the next figure. This pedigree shows some more information about Henri's closest relatives, emphasizing the pair of consanguineous marriages.

There are 14 people shown in Henri's generation, all born to first-cousin marriages. (There may have been two more children in the Alix–Amédée marriage, but I have been unable to find any direct reference to them.) Of these people, six seem to have had disabilities similar to Henri's: Henri himself; his brother, who died the day before his first birthday; Madeleine, who died as a teenager; Geneviève; Béatrix; and Fides. The latter was so small that apparently she lived her entire life in a baby carriage (Rosenhek 2009). The photo below shows Henri with most of the Tapié de Céleyran family. It was taken in the summer of 1896 at Château du Bosc, where Henri had been born. 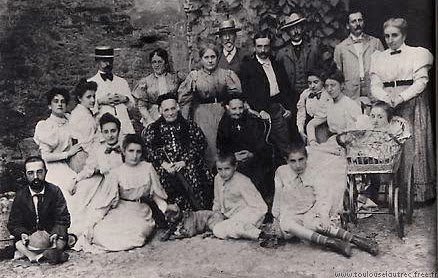 The two elderly women in the middle are Gabrielle (left) and Louise (right), the maternal and paternal grandmothers (they were sisters, remember). The father, Amédée, is at the rear centre (sticking his tongue out at the photographer), and the mother, Alix, is standing at the far right. Standing next to her is the oldest son, Raoul; and his wife, Elisabeth, is seated at the far left. The next two sons, Gabriel and Odon, are absent, along with their wives. The next son, Emmanuel, is standing at the back left; and his wife, Marie-Thérèse, is seated next to the pram (middle right). The youngest sons are sitting on the ground at the front centre, with Alexis on the left and Olivier on the right. The first-born daughter, Madeleine, was already dead when the photo was taken. The next three daughters are sitting at the middle left, with Germaine sitting on Elisabeth's lap, Geneviève in front of her, and then Marie seated on the ground. Béatrix is at the middle right, sitting next to Marie-Thérèse, and Fides is in her pram. Henri himself is seated on the ground at the far left. His brother, Richard, had also died before the photo was taken. The remaining four people (standing either side of Amédée) are other relatives.

Nevertheless, this large family did manage to survive the effects of inbreeding, unlike Henri's own family. At least seven of the children survived to have children of their own (~19 grand-children):
Note that Gabriel and Anne were third cousins, since they had great-grand-fathers who were brothers; nevertheless, they had 3 female children, at least one of whom also had 3 children. One of Alexis' sons (ie. Henri's second cousin once removed) was well-known art critic Michel Tapié de Céleyran (1909-1987), who married and had seven children, two of whom died in infancy.

Inbreeding increases the probability that recessive alleles will be expressed, but it does not make this inevitable. In Henri's case, two disabled children in succession seems to have dissuaded his parents, and they separated, whereas his aunt and uncle had a healthy child the second time, and so they continued producing a family. However, these days it is not recommended that you marry any of your first cousins.

Evolution is about biodiversity at all hierarchical levels, not just between or within species, but within individuals as well. Average intra-individual genetic diversity reaches a maximum when the ancestry is tree-like, and reduces with each instance of inbreeding, which turns the tree into a network of increasingly greater complexity.

I have discussed an even more extreme example of consanguinity in a previous post (Family trees, pedigrees and hybridization networks), in which the inbreeding became so severe that the royal family lineage actually came to an end.