The curious case of the word “stemma” — from circles to trees


Each word has its own history, according to a maxim attributed to Jules Gilliéron that makes some historical linguists tremble. One with a curious history is the word stemma (plural stemmata), which we stumble upon when investigating the development of phylogenetic trees.

David has been exploring this question for some time, showing how the origin ultimately lies in the alternative to the hierarchical model of the Aristotelian "scale" offered by the practice (and the metaphors) of genealogies and pedigrees. While dealing with possible influences on 19th-century biology, I have explored a different field, stemmatics ("textual criticism"), which shares with genealogical practices both the tree model and, obviously, the word stemma. As stemmatics is one of the first scientific approaches to the idea, and considering that the now widespread tree is likely a calque of German Baum, itself a calque of stemma, it is worth writing a bit about the history of this word.

Dictionaries (as well as my queries in Google Books, which would probably fail to impress a reviewer) agree that not even in Romance languages does this Latin word display an uninterrupted tradition from the time of Caesar. It only entered languages such as English and Italian, with the meaning of "genealogical tree; pedigree; nobility", from the mid 17th century on. This date supports the theory that family pedigrees were not commonplace before the 17th century (when they became a true fashion, as in Strein, 1559), despite being drawn since the Middle Ages and always discussed — as in royal disputes or in the case of the genealogies of Jesus found in the Gospels (likely drawn to confirm the messianic claims with Jewish criteria, but assimilated to the European mindset). In short, modern stemmata are mostly a product of Neoclassical fashion, and their popularity was influenced by the same descriptions of Roman pedigrees where the word was learned.

Speaking of pedigrees, this Latin word is of Greek descent, a loanword of στέμμα [stémma], meaning "wreath, crown". This sense was already a development of an original "that which surrounds; circle": in Homer's Iliad, for example, we still find an occurrence in the first sense of "circle" (of warriors, cf. XIII.736); but elsewhere the word refers to a laurel-wreath wound around a staff, mostly in the plural and in relation to the laurel god Apollo (cf. Iliad, I.14, I.28, and I.373). The development is due to the costume of conceding crowning wreaths, with στέμμα deriving from the verb στέφειν [stéphein] ("to encircle, to crown, to wreathe, to tie around") by the addition of the morpheme -μα [-ma], used to form nouns denoting the result of an action, as in the analogous case of γράφω (gráphō, "write") and γράμμα (grámma, "that which is written"). Our word ultimately derives from the Proto-Indo-European root *stebh- "post, stem; to place firmly on; to fasten", related to English "(to) step" and "staff". 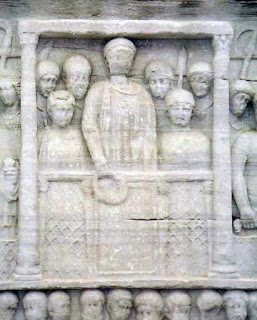 Theodosius offers a laurel wreath to the victor;
on the base of the obelisk in the Hippodrome (Istanbul)
[source: Wikipedia]

The "wreath, garland, chaplet" meaning is attested in Ancient Greek literature of all times and genres, such as in tragedy (cf. Euripides, Andromache, 894), comedy (cf. Aristophanes, Wealth, 39), philosophy (cf. Plato, Republic, 617c), and historiography (cf. Thucydides, Peloponnesian War, IV.133). At least one metaphoric usage is attested, in the sense of "web/tangle of life" (cf. Euripides, Orestes, 12), and various inscriptions indicate an additional meaning of "guild" (such as in one "guild of huntsmen" epigraph quoted by Liddell & Scott, 1940). The genealogical meaning is only found in later Greek authors like Plutarch (1st century CE), suggesting that it was imported from Latin.

The Roman meaning developed from the custom of decorating the portraits of one’s ancestors, sometimes in elaborate full-wall genealogies, with laurel wreaths indicating both excellence and nobility (as "noble" pretty much meant "descending from gods"). Domestic cults were central to Roman religion, and this practice seems to have become so widespread in Imperial times that it turned into a banality, with the laurel decoration being decried as a symbol of vanity by poets and philosophers alike. The custom – and the usage of stemma for "genealogical tree" – is mentioned twice by Seneca in essays of utmost importance for Roman Stoicism. In Ad Lucilium Epistulae Morales, XLIV.1, he says:


Si quid est aliud in philosophia boni, hoc est, quod stemma non inspicit. Omnes, si ad originem primam revocantur, a dis sunt. [Philosophy also has this advantage: it does not look at your genealogical tree. Everyone, if we look at their remotest origin, descends from the gods].


We all spring from the same source, have the same origin; no man is nobler than another except in so far as the nature of one man is more upright and more capable of good actions. Those who display ancestral busts in their halls [qui imagines in atrio exponunt], and place in the entrance of their houses the names of their family, arranged in a long row and entwined in the multiple ramifications of a genealogical tree [ac multis stemmatum illigata flexuris] – are these not notable rather than noble? Heaven is the one parent of us all, whether from his earliest origin each one arrives at his present degree by an illustrious or obscure line of ancestors. You must not be duped by those who, in making a review of their ancestors, wherever they find an illustrious name lacking, foist in the name of a god. [adapted from the translation of Basore, 1935] 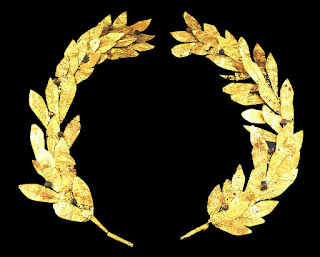 In matters of phylogenetics, to prove that something existed is usually not enough, as we should try to demonstrate its influence and descent. Both are clear in the case of Seneca: his moral essays were read and copied without interruption in the early years of Christianity, proliferated during the Carolingian Renaissance, and were among the most published works of secular Western literature for centuries. The Wikipedia article on the second essay is well referenced on the matter:

The new meaning od the word is confirmed by many other authors popular in Medieval times, and especially after the Renaissance, such as Suetonius (cf. Nero, 37; Galba, 2) and Statius (cf. Silvae, 3). Pliny the Elder's Naturalis Historia, an obligatory reading for all Western scholars from the Renaissance to at least the 19th century, is another important source. When exposing the history of Roman art and discussing the honor attached to portraits, Pliny mentions that "in ancient times" people had much care for faithful likeness, when "portraits modeled in wax were arranged, each in its separate niche, to be always in readiness to accompany the funeral processions of the family [... while the] the pedigree [stemmata] of the individual was traced in lines upon each of these coloured portraits" (XXXV.6, adapted from Bostock, 1855).

The last important source to note is the eight Satire of Juvenal, on the paradoxes of the Roman aristocracy, where the word stemma, as usual in the plural, is used to open the poem:

Sources suggest that the new meaning was well established by the reign of Hadrian (2nd century CE), including the derivative meanings of "high value" (cf. Martial, Satyra, VIII.6) and "antique", as in Prudentius (cf. Liber Cathemerinon, VII.81), a Christian author much read in Medieval times. As already mentioned, the word even found its way back into Greek with the new semantic shift, such as in Plutarch, one of the most popular Greek authors since the Renaissance. In his Numa, 1, we find:


ἔστι δὲ καὶ περὶ τῶν Νομᾶ τοῦ βασιλέως χρόνων, καθ᾽ οὓς γέγονε, νεανικὴ διαφορά, καίπερ ἐξ ἀρχῆς εἰς τοῦτον κατάγεσθαι τῶν στεμμάτων ἀκριβῶς δοκούντων ["There is likewise a vigorous dispute about the time at which King Numa lived, although from the beginning down to him the genealogies seem to be made out accurately"; Perrin, 1914].

It is somewhat ironic that the accusations of futility and uselessness of genealogical trees probably contributed to the Medieval and Renaissance restoration of such practices. Informed about the Roman tradition, and equipped with examples from nobility and religion, people turned genealogy and its trees into a fashion. This helped to lay the ground for the acceptance of the tree model when new scientific endeavors required a better way to describe things, like dog races and strawberry varieties, especially when non-ascending genealogies (who descends from whom, instead of who are the ancestors of whom) were already common, and when the concept of the "tree of life" gained a new popularity. 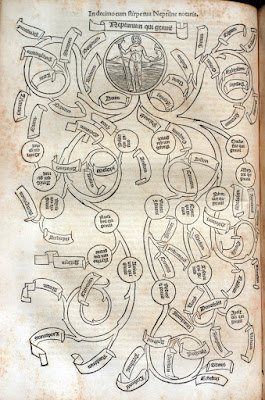