Dante and the tree model


I was preparing a blog post on phylogenetic methods for the study of the Divine Comedy, by Dante Alighieri (1265-1321), and it occurred to me that a note on Dante's contribution to the tree model might also be worthwhile. This medieval poet cannot, of course, be described as the father of the Stammbaum, but he should probably be listed among the many sources for the development of the model, and of the linguistic theories that it supported in the 19th century.

The study of Dante's works became almost an international mania with the rise of Romanticism in the 18-19th centuries, and scholars are not strangers to his more obscure works. One of these works is an abandoned linguistic essay entitled De vulgari eloquentia ("On eloquence in the vernacular language", circa 1305). In short, it is an unfinished manual on composition, a "poetics", with an introductory chapter discussing the appropriate language for poetry. The essay is written in Latin, but from the first paragraphs the author declares that the same language is not suitable for literature, as it is not a living language. Latin is then reserved for scientific and philosophical matters, and the author "ventures in a quest" for a good literary vernacular. 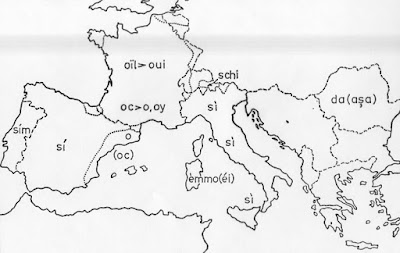 The first paragraphs are full of medieval opinions on language, such as the confusion arising from the Tower of Babel, and a discussion about how a linguistic ability would be superfluous for demons and angels alike. Towards the end the author starts to favor an artificial vernacular language, concluding that no living language (among the 14 dialects of the Italian peninsula) would be good enough. This latter idea was not followed when he wrote the Divine Comedy (which was written in Tuscan, Dante's native dialect), and this probably explains why the essay was abandoned just when the composition of that poem was begun.

However, between the biblical linguistics and the poetic formalism, Dante explores linguistic matters with an almost modern (and sometimes surprising) mindset. For example, he discusses how birds don't talk but simply repeat air movements; he discusses how grammar (i.e. Latin and Greek) is a codification; he provides a detailed, while subjective, map of the Italian vernaculars of the 12th century; and, what matters for us here, he explains that not all linguistic differences are due to the "vengeful confusion" arising from the Tower of Babel. Being human constructions, he says, languages are unstable and, as such, will change, as proved by many similarities that can't be random and don't really add much confusion (i.e. their differences are too feeble to be a consequence of the punishment of an almighty god). Our problem, he continues, is that changes are gradual and subtle, and as such we don't perceive them; but they do exist, as someone who returns to a city after many years can confirm, or as can be recorded when moving from city to city.

The (genealogical) tree model is implicit but undeniable in the eighth chapter of the first book, when the author uses words such as "root", "planted", and "branches". Here, I also report the original words in Latin, along with a translation adapted from Botterill (2006):


The confusion of languages [after the Tower of Babel] leads me [...] to the opinion that it was then that human beings were first scattered throughout the whole world, into every temperate zone and habitable region, right to its furthest corners. And since the principal root [radix] from which the human race has grown was planted [plantata] in the East, and from there our growth has spread, through many branches [palmites] and in all directions, finally reaching the furthest limits of the West [...]. [...] these people brought with them a tripartite language. Of those who brought it, some found their way to southern Europe and some to northern; and a third group, whom we now call Greeks, settled partly in Europe and partly in Asia. Later, from this tripartite language (which had been received in that vengeful confusion), different vernaculars developed, as I shall show later. For in that whole area that extends from the mouth of the Danube (or the Meotide marshes) to the westernmost shores of England, and which is defined by the boundaries of the Italians and the French, and by the [Atlantic] ocean, only one language prevailed, although later it was split up into many vernaculars by the Slavs, the Hungarians, the Teutons, the Saxons, the English, and several other nations. Only one sign of their common origin remains in almost all of them, namely that nearly all the nations listed above, when they answer in the affirmative, say iò [see the map above, from Elisabeth Burr] Starting from the furthest point reached by this vernacular (that is, from the boundary of the Hungarians towards the east), another occupied all the rest of what, from there onwards, is called Europe; and it stretches even beyond that. All the rest of Europe that was not dominated by these two vernaculars was held by a third, although nowadays this itself seems to be divided in three: for some now say oc, some oïl, and some sì, when they answer in the affirmative; and these are the Hispanic, the French, and the Italians. Yet the sign that the vernaculars of these three peoples derive from one and the same language is plainly apparent: for they can be seen to use the same words to signify many things, such as 'God', 'heaven', 'love', 'sea,' 'earth', 'is', 'lives', 'dies', 'loves', and almost all others. Of these peoples, those who say oc live in the western part of southern Europe, beginning from the boundaries of the Genoese. Those who say sì, however, live to the east of those boundaries, all the way to that outcrop of Italy from which the gulf of the Adriatic begins, and in Sicily. But those who say oïl live somewhat to the north of these others, for to the east they have the Germans, on the west and north they are hemmed in by the English sea and by the mountains of Aragon, and to the south they are enclosed by the people of Provence and the slopes of the Apennines.

The De vulgari eloquentia has routinely been printed alongside the Divine Comedy, and was studied, to give some examples, by Thomas Warton in his History of the English Poetry (London, 1775), by Johann Gottfried Eichhorn in his Allgemeine Geschichte der Cultur und Litteratur des neueren Europa (Göttingen, 1796), and by August Pott (a student of Franz Bopp) in his Indogermanischer sprachstamm" (1840). The essay was copied in Germany even before the introduction of the printing press; and a German translation, Über die Volkssprache (K. L. Kannegießer, 1845), was published in Leipzig when August Schleicher was already active in linguistic studies.

By this time, it seems, the work was almost a commonplace topic of discussion — when defending his model for the Italian language, and complaining about people who proposed a 12th century language for a 19th century nation state, around 1830, Alessandro Manzoni jokingly reminded us that it was "one of those books which nobody actually read, but everybody discusses".

This is one more little note to our narrative on the evolution of the tree model.