Charles Darwin's metaphor of the Tree of Life was not a tree, even in The Origin of Species. As noted by Franz Hilgendorf (see The dilemma of evolutionary networks and Darwinian trees) "the branches of a tree do not fuse again", and yet in his book Darwin discusses at least one circumstance when they do precisely that — hybridization.

Darwin's discussion of hybridization occupies all of chapter 8 of the Origin. His stated motivation is to address what many people might see as a fatal objection to his theory of species origins by means of natural selection. One of Darwin's main arguments in the book is that "descent with modification" is continuous, and therefore the distinction between species and varieties (and subspecies, etc) is an arbitrary cut in a continuum of biodiversity. However, it was conventionally accepted that varieties within the same species could cross-breed freely, but any attempt to hybridize distinct species would always fail. Darwin opposes this view by citing extensive evidence showing that varying degrees of sterility are encountered in efforts to cross-breed different species of plants (and a few birds) — if the species are closely related then often there will be a small degree of fertility in the hybrid offspring. So, as two related forms diverge from one another in the course of evolution, their ability to inter-breed gradually diminishes and eventually falls to zero (absolute sterility).

It is important to note that his motivation for writing about hybridization was independent of his ideas about phylogeny. So, he seems not to have noticed the consequence of hybridization for phylogenetic patterns. 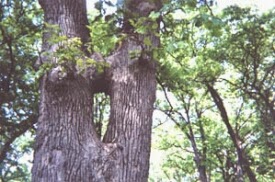 This is similar to the situation regarding his so-called "tree diagram", in chapter 4. His motivation for the diagram (the only figure in his book) was a discussion of descent with modification, and particularly the continuity of evolutionary processes. He was expressing his idea about uninterrupted historical connections. In particular, this was part of his concern that there is no fundamental distinction between varieties and species, because evolutionary divergence is continuous — it is all a matter of degree, without sharp boundaries. His Tree of Life image expressed the continuity of evolutionary connections, not phylogenetic patterns. This is clear from his poetic invocation of the biblical Tree of Life, which is about the inter-connectedness of all living things along tree branches, not about patterns of biodiversity.

Implicit in this world view is the idea that the Tree of Life is still a tree in spite of hybridization. That is, Darwin failed to see that his "tree simile" (chapter 4) had to ignore hybridization (chapter 8) in order to work. His figure does not show any evidence of hybridization, only divergence. It was not intended to be what we would now call a phylogeny, but merely an idealized view of divergence and continuity of descent. When introducing the Tree of Life, he was using religious imagery to stimulate the imagination of his readers, and in so doing presented a contradictory argument — there is continuity along the branches as well as continuity of inter-connections.

The alternative conception is that Darwin's Tree of Life was never a tree — it was a network. From this world view, Hilgendorf's dilemma was actually irrelevant. He commented:


An observation which, as far as I know, contradicts these previously discussed views, [would be], that formerly separate species approach each other and finally merge with each other. This would not fit the beautiful image that Darwin presented about the connection of species in a branch-rich tree; the branches of a tree do not fuse again.

Well, they do, even in a Darwinian tree.