In this post I consider the subsequent history of phylogenetic networks, as far as I have been able to determine it, up until 1990. Networks remained relatively rare up to that time; and indeed even the name "phylogenetic network" usually referred to an unrooted tree rather than to a reticulating network (Who first used the term "phylogenetic network"?). From 1990 onwards networks have become quite common, and many scores of them have now been published.

Below, I present all of the networks that I am aware of from 1900-1990. I doubt very much that this includes all of the published networks. Indeed, I do not know even what proportion of them are presented here. However, I do believe that this is a representative selection of the uses of phylogenetic networks between 1900 and 1990.

This was an era in which trees dominated phylogenetic thinking, presumably in response to Charles Darwin's 1859 book (Who published the first phylogenetic tree?). Reticulation was talked about by a number of authors when discussing affinity, notably in botany (Stevens P.F. 1994. The Development of Biological Systematics: Antoine-Laurent de Jussieu, Nature, and the Natural System. Columbia Uni. Press, New York), but it was rarely illustrated, especially empirically. Indeed, the most popular time for affinity networks was up to the mid-late 1800s, at which time genealogical trees took over.

Most of the networks shown below are rooted, and thus represent genealogy, but a few unrooted affinity networks still appeared. However, in general few people used phylogenies to display their results, even when discussing hybridization or horizontal gene transfer. The people investigating these phenomena appeared to not be thinking in terms of phylogenetics, but instead were investigating mechanisms among a small group of species. The phylogenetic context that is so prevalent in biology today was rare before 1990.

There is an obvious peak during the 1950s, and there is an interesting gap after 1970 when cladistics rose to prominence, with its focus on dichotomous trees (Who first used the term "phylogenetic network"?). Nevertheless, the existence of such a diverse collection of networks shows that biologists were still able to "think outside of the box" when they felt it was necessary. 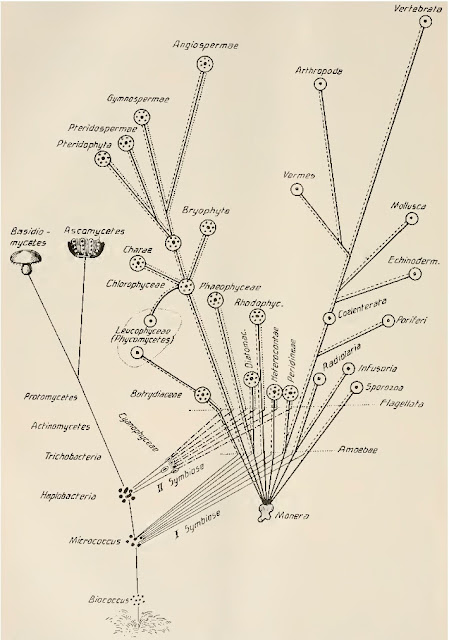 Grant V. (1953) The role of hybridization in the evolution of the leafy-stemmed gilias. Evolution 7: 51-64.
Available from JStor.

Goodspeed T.H. (1954) The genus Nicotiana: origins, relationships and evolution of its species in the light of their distribution, morphology and cytogenetics. Chronica Botanica 16: 1-536.
The figure is taken from Chase et al. (2003) Annals of Botany 92, available from Oxford.