As is always emphasized in this blog, it is best to explore the nature of any phylogenetic dataset, before proceeding to a formal data analysis. Usually, I discuss examples where important insights are revealed by using a phylogenetic network as a form of Exploratory Data Analysis. Here, instead, I note an example where there are few noteworthy features, in addition to those emphasized by the phylogenetic tree — some datasets really are tree-like. 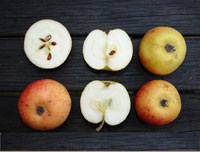 The data involve 47 chloroplast genomes from cultivated apple varieties and wild apple species (genus Malus). The nucleotide alignment is 134,553 bp; and the dataset is available in the Dryad database.

This does not, however, examine whether the phylogenetic signal is tree-like or not. This is best done with a phylogenetic network. So, I have used a NeighborNet network based on the P-distances, as shown below.


In their tree-based analysis (a bootstrapped maximum-likelihood tree) the authors recognize five monophyletic groups (labeled A to E) plus the outgroup Pyrus. The network reveals that the major groups (A–E) are tree-like except for three things:
Points (1) and (2) indicate that only branches with 100% bootstrap values (nothing less) are well-supported by the data. Indeed, the branches with 90% and 87% support are very short branches, so there is no significant character data support.

For point (3), the tree-building analysis makes a somewhat arbitrary decision to resolve the conflicting relationships — it shows M. fusca as the sister to group A, but it includes M. micromalus within the group.

Otherwise, the authors' confidence in their tree-based results seems to be well justified.