Transformational evolution is easier to grasp than variational evolution, and so it is hardly surprising that evolution tattoos should include the Descent of Man (or March of Progress) image. We have six examples here. 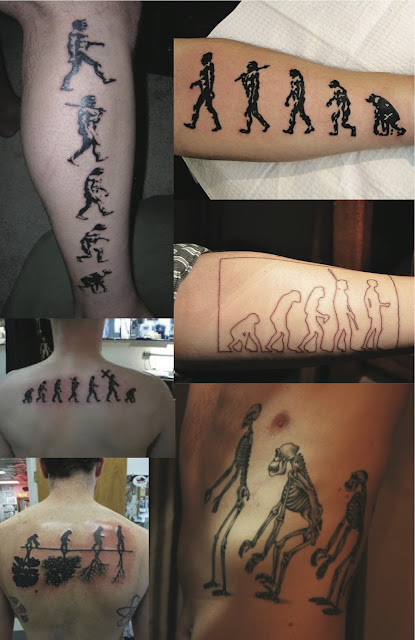 The image originated as shown in the bottom-right tattoo, which is based on the frontispiece to Thomas Henry Huxley's book about primate anatomy (1863. Evidence as to Man's Place in Nature. Williams & Norgate, London), as reproduced in the next picture. 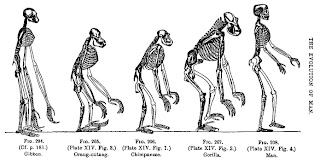 A century later, this image was expanded and updated in a book by the anthropologist Francis C. Howell (1965. Early Man. Time-Life International, New York), as shown in the next picture. (The full-size picture, with labels, can be viewed here.)

In spite of it's disconnection with modern phylogenetic ideas (see my blog post on Linear versus branching evolution), it is probably the single most famous image in evolutionary biology. However, as a tattoo image it cannot compete in popularity with Charles Darwin's "I think" tree (as shown in the blog posts Tattoo Monday III, Tattoo Monday V and Tattoo Monday VI).

Email ThisBlogThis!Share to TwitterShare to FacebookShare to Pinterest
Labels: Tattoo